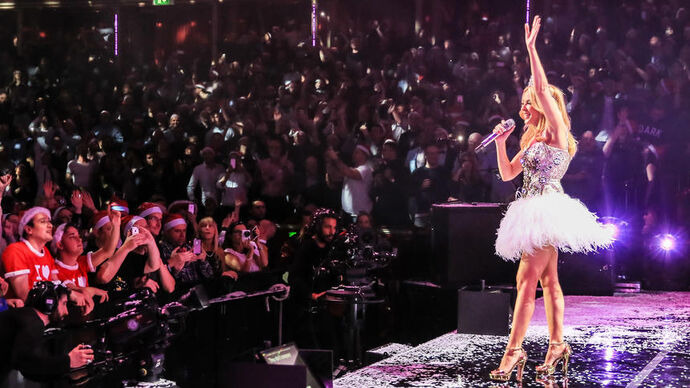 This page is about the concert series. For the 2010 EP, see A Kylie Christmas (EP).

"A Kylie Christmas" is a series of Christmas concerts performed by Kylie Minogue at the Royal Albert Hall in London, in support of her album Kylie Christmas (2015). The show comprised of one show in 2015, and another two in 2016, which were in support of the reissue of Kylie Christmas. In 2015, Kylie performed mainly songs from her album Kylie Christmas, but included some of her previous hits. Kylie was joined by special guests Chrissie Hynde and Dannii Minogue for "2000 Miles" and "100 Degrees", respectively. The shows in 2016 were adapted to include songs from the Snow Queen Edition, as well as more special guests

Following the release of her first full Christmas album Kylie Christmas in 2015, Kylie announced on 2 October 2015 that she would be performing a Christmas show at London's The Royal Albert Hall on December 11 of that year; selling out the venue, she asked at the end of the concert, prior to singing "I Wish it Could Be Christmas Everyday", whether it should become an annual thing; it was announced in October of 2016 that a "Snow Queen Edition" of the aforementioned Christmas album would be released in late November, and soon was announced that two shows at the Royal Albert Hall would be taking place on December 9 and 10 2016.

In 2016, Kylie revealed that the venue had asked to book her for the following year just one hour after the 2015 concert ended; she also revealed that the shows in 2016 would be different from the 2015 show, including the new tracks as well as some surprise guests; Dannii, however, will not be one of them

The 2015 show comprised of two sections with an intermission between the two; the show opened with five back-to-back Christmas songs, before Kylie announced that some "Kylie tunes" would also be thrown into the mix before performing "Wow", which was followed by two more songs from the album. After a costume change and a small string interlude, Kylie performed her smash hit "Can't Get You Out of My Head" before singing a duet of "2000 Miles " with Chrissie Hynde".

The second section began with a disco segment where Kylie performed "On a Night Like This", "Spinning Around" and "Your Disco Needs You", and also performed christmas song "100 Degrees" with her sister Dannii; this became their first televised duet in 30 years. Kylie then performed more of her christmas songs following a costume change and also invited the audience to sing "The Twelve Days of Christmas" and "Jingle Bell Rock" with her acapella. The White Diamond Theme, used in her For You, For Me tour preceded a ballad version of "I Believe in You" and a solo version of "Only You" before she ended the main body of the show with "Celebration"

The encore comprised of a singalong to "Especially For You" before Kylie ended the show with a "big old singalong" of "I Wish It Could Be Christmas Everyday "; this later appeared on the reissue of "Kylie Christmas".

The running order of the show was largley similar to that of the 2015 show; it included the new songs from the Snow Queen Edition and also some new costumes.

The show opened again with "It's the Most Wonderful Time of the Year", which was followed by four more Christmas songs, including "Wonderful Christmastime" and "At Christmas". The second section was entirely new; Kylie emerged wearing all white to sing the Abbey Road version of "Come into My World". This was followed by a performance of "Confide in Me" with John Grant, and a performance of "The One" which was done in the same style as in the For You, For Me Tour. The third section started with "Better the Devil You Know", where Olly Alexander from Years & Years duetted with her. Kylie then went on to perform "Celebration" and "Stay Another Day".

The second half of the show began with the disco section, where "Your Disco Needs You", performed with Katherine Jenkins, "100 Degrees", "Spinning Around" and "Christmas Lights" were performed. The penultimate section included the jazz version of "The Loco-Motion" performed in the Showgirl and Homecoming tours, as well as the Abbey Road version of "Can't Get You Out of My Head", "Everybody's Free (To Feel Good)" and "Night Fever". The encore consisted of three songs; "Silent Night", "Especially For You" and "I Wish It Could Be Christmas Everyday".

Encore
28. "Especially For You"
29. "I Wish It Could Be Christmas Everyday"

Act I
1. "It's The Most Wonderful Time of the Year"
2. "Wonderful Christmastime"
3. "Santa Claus Is Coming to Town"
4. "Christmas Wrapping"
5. "At Christmas"

• In 2015, "Have Yourself a Merry Little Christmas" was originally part of the set list between "2000 Miles" and "Christmas Isn't Christmas 'Til You Get Here".
• In 2016, "Stay Another Day" was only performed on the December 9 show.

A Kylie Christmas – Live from the Royal Albert Hall 2015