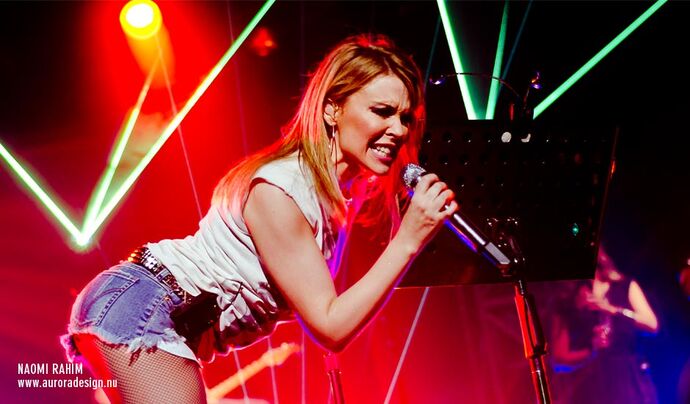 Anti Tour
Anti Tour was a mini-tour by Kylie Minogue, launched as part of her K25 celebrations

The Anti Tour was the twelfth concert tour by Kylie Minogue, part of the "K25" project. In contrast to Kylie's previous tours, she only performed b-sides, demos and rare tracks, on a short strip of concerts in smaller venues, to a reduced crowd and intimate setting.

In April 2011, during the Aphrodite: Les Folies Tour, Kylie talked about the Anti Tour conception:

Due to the fact that the first two shows in Australia sold out only minutes after the tickets went on sale, Kylie announced that she would perform second shows on both dates. On 25 March, Kylie announced that she would be performing two shows in the United Kingdom during April. Both UK shows sold out within ten minutes but quickly found their way on resale sites at discounted rates. Due to huge demand, a second show in Manchester was announced.

The show was met with universal critical acclaim. Emily Jupp from The Independent gave the concert a five star review stating that Kylie was "[She’s] warm and sassy" and "Graceful [...] like a magical joy-sharing fairy, sprinkling euphoria across the crowd". About the staging of the show, Jupp said that "There’s no choreography and just one slight costume change but she proves she doesn't need theatrics." concluding that "She didn't even need the glitter; she sparkled brightly all by herself." Michael Wilton from musicOMH gave the concert a favorable review, awarding it with four stars, stating that "Backed by a stripped-down, well-rehearsed four-piece band and three backing singers, Kylie had to rely solely on her command of the stage. Although Kylie will not go down in history as one of pop’s great voices, her vocal control and delivery has improved dramatically, and for the most part, she exceeded possibly even her own expectations." Wilton said that "even though the show still had a structured sheen, Kylie was completely relaxed, joking with fans, giggling when she forgot the lines to a song, and dancing to the beat of her own drum on stage." He concluded his review by saying that "25 years later, she’s still clearly enjoying herself, and more importantly, eternally grateful to her fans." Dianne Bourne of the Manchester Evening News notes that Kylie "has been the undoubted queen of the Manchester Arena over the past 10 years, performing more concerts to more fans than any other female artist", describing her concert as "undoubtedly something magical."

Other songs performed throughout the tour include:

1 Two shows were performed during the same night at these dates.

Retrieved from "https://kylieminogue.fandom.com/wiki/Anti_Tour?oldid=12284"
Community content is available under CC-BY-SA unless otherwise noted.