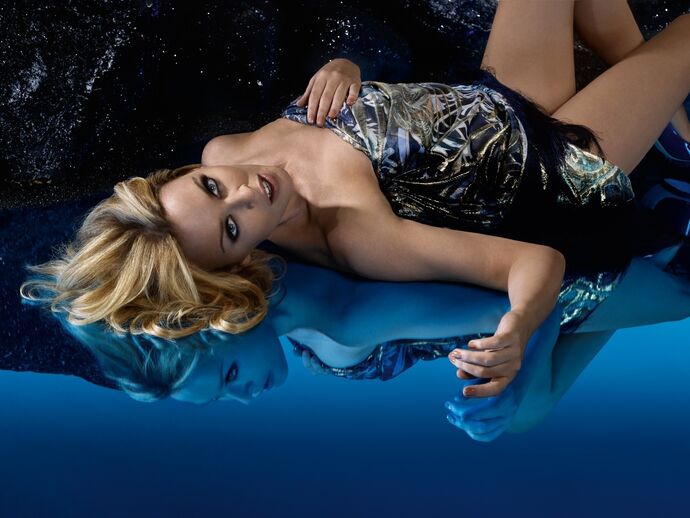 Aphrodite
11th studio album
Aphrodite is the eleventh studio album by Australian singer Kylie Minogue; it was released on June 30, 2010

Aphrodite is the eleventh studio album by Kylie Minogue. It was released on the 30 June 2010 under Parlophone. Recording began in 2009 when Kylie met with Nerina Pallot, but the sessions became unproductive; she then began working with British electronic music producer Stuart Price, who became the executive producer of the album. The two collaborated with various producers and writers on the album, including Jake Shears, Calvin Harris, Sebastien Ingrosso and Pascal Gabriel.

Upon its release, Aphrodite was met with generally positive reviews from music critics, many saying it was a return to form for Kylie. However, critics were divided on its production; many felt Price's production helped make the album cohesive, while some felt it made the album sound too similar to Kylie's previous work.

Commercially, Aphrodite was a success. In Australia, it peaked at number two on the Australian Albums chart, and was later certified platinum by the Australian Recording Industry Association. In the United Kingdom, the album debuted at number one on the UK Albums chart, a feat accomplished by Kylie's debut studio album Kylie (1988) during the same week 22 years earlier. Aphrodite was Kylie's fourth studio album to peak atop the UK albums chart and made her the first solo artist to have a number one album in four different decades in the region, achieving this in the 1980s, 1990s, 2000s and 2010s. She also became a Guinness World Record-holder for achieving the most consecutive decades with top five albums in the United Kingdom. The British Phonographic Industry certified Aphrodite platinum. The album also achieved strong charting internationally, reaching the top-five in countries like Belgium, France, Greece, Spain and Switzerland. It became Kylie's second highest-charting album in the United States by peaking at number 19 on the Billboard 200 chart.

Four singles were released from Aphrodite. The lead single, "All the Lovers" was released on 28 June 2010, and was a commercial success, peaking at number three in the UK and reaching the top ten in numerous countries like France, Italy, Scotland and Spain. In Australia, it narrowly missed the top ten by peaking at number 13 on the singles chart. "Get Outta My Way" was released as the second single and reached the top 20 in the United Kingdom, but underperformed in Australia after failing to peak inside the top 50. Similarly, the third single "Better than Today" missed the top 50 in Australia, and additionally missed the top 20 in the United Kingdom. In response to their poor chart performances, Kylie stated that no further singles would be released. Despite this statement, "Put Your Hands Up (If You Feel Love)" was released as the fourth and final single from Aphrodite, as a way to celebrate the reaction it received on tour, and peaked at number 50 in Australia. In the United States, all four singles released from the album peaked atop the Billboard Hot Dance Club Songs chart. To further promote the album, Minogue embarked on the successful Aphrodite: Les Folies Tour in 2011.

Kylie released her tenth studio album X in 2007. Slated to be released as her comeback album, X went platinum in her native country Australia after it debuted at number one on the Australian Albums chart. In the United Kingdom, the album entered and peaked at number four on the UK Albums Chart and was eventually certified platinum. Critical reception towards X was generally favourable, although many critics felt that it lacked introspection from Kylie's side due to its lack of consistency and high amount of "filler" tracks. In retrospect, critics argued that the album did not serve as a worthy comeback for Kylie.

Soon she began working on her Aphrodite. Recording sessions began in April 2009 when Kylie met with British singer-songwriter Nerina Pallot, with whom she readied the track "Better Than Today". These sessions proved to be less successful, as her suggested songs were "rapidly supplemented with tracks from a wide range" of contributors. Kylie felt her sessions with Pallot did not yield any dance-pop tracks; fearing that she was "going down the same road, doing the rounds of all the pop dynamos but lacking any cohesive quality," she approached her close friend Jake Shears, male lead singer of American pop group Scissor Sisters, for advice. Shears encouraged her to work with Stuart Price, a Grammy award-winning British electronic music producer who had collaborated with Scissor Sisters on their third studio album Night Work (2010). Miles Leonard, chairman of Parlophone, enlisted Price as the executive producer of the album. He had previously served as the executive producer of Madonna's tenth studio album Confessions on a Dance Floor (2005).

"Get Outta My Way" was released as the second single, on 27 September 2010. While it was moderately successful in the United Kingdom, and reached number 14 on the UK Singles chart, it was a commercial disappointment in Australia and only managed to peak at number 69 on the singles chart. In the United States, the song peaked at number one on the Billboard Hot Dance Club Songs chart.

"Better Than Today" was released as the third single from the album, on 3 December 2010. Although critics were generally favourable towards the song as a track on the album, some dismissed its release as a single due to its overly sweet-sounding composition. The single was less successful than "All the Lovers" and "Get Outta My Way". It peaked at number 55 on the Australian singles chart, and thus became the second single release from Aphrodite to miss charting inside the top 50. In the United Kingdom, it missed charting inside the top 20 by peaking at number 32 on the UK singles chart. In the United States, the song became the third consecutive single release from the album to peak at number one on the Billboard Hot Dance Club Songs chart. An old school arcade game-inspired music video was directed for the song by Kylie and her stylist William Baker.

Following the poor chart performance of "Get Outta My Way" and "Better Than Today", Kylie expressed her disappointment in Parlophone, saying:

Although Kylie mentioned that "Better Than Today" would be the last single to be released from Aphrodite, "Put Your Hands Up (If You Feel Love)" was released as the fourth and final single from the album, on 29 May 2011. The single managed to reach the top 50 in Australia, peaking at number 50 on the singles chart. It peaked at number one on the Billboard Hot Dance Club Songs chart, thus becoming the fourth single from Aphrodite to peak atop the chart. No official music video for the single was commissioned, although a lyric video for a remixed version of the song by Pete Hammond was released.

The singles run for Aphrodite was meant to be completely different; with an initial release date for March 2011, "Too Much" was meant to lead the campaign until recording sessions were extended, where it was placed as the third single, but plans for release were ultimately scrapped. "Put Your Hands Up (If You Feel Love)" was also considered for the lead but it was ultimately decided to go for "All the Lovers"; the song was then meant to be released as the follow-up to "Get Outta My Way", and moved to fourth when "Better Than Today" was released after A&R became obsessed with it; the under-performance meant further plans for the album were frozen, until Kylie pushed for "Put Your Hands Up (If You Feel Love)" to be released.

Even before the consideration to release "Better Than Today", both "Cupid Boy" and "Can't Beat the Feeling" were planned to be released as the fourth and fifth singles respectively, with remixes being commissioned for both; it was not until the release and under-performance of "Better Than Today" did these plans get cancelled; however, some of the remixes for "Cupid Boy" ended up on the releases for "Put Your Hands Up (If You Feel Love)" and the Les Folies Tour Edition of Aphrodite.

To promote Aphrodite, Kylie embarked on the Aphrodite: Les Folies Tour, beginning in early 2011. The tour was staged by the creative team behind Disneyland Resort's World of Color show, and the budget of the tour was reported to be around $25 million. Concert shows were held at Europe, North America, Asia, Australia and Africa. Kylie's costumes and wardrobe was designed by her frequent collaborators Domenico Dolce and Stefano Gabbana, owners of the Italian luxury industry fashion house Dolce and Gabbana. The concert shows were spectacles "loosely based around Greek mythology". The entire tracklist of the album, excluding only the song "Too Much", was included in the setlist of the tour; other songs were taken from Kylie's previous studio albums, such as Light Years (2000) and Fever (2001). The tour was a commercial success, and ranked at number 21 on Pollstar's year-end "Top 25 Worldwide Tours" list, with a total gross of $52.8 million and ticket sales of 527,683 units. A live album of the concert show held at the O2 Arena in London, was released as Aphrodite Les Folies: Live in London, on 7 June 2011.

On 28 June 2011, a three-disc remix collection of Aphrodite, subtitled the Les Folies Tour Edition, was released. It contains remixes of the original songs by various producers such as Pete Hammond, Denzal Park, Muscles, and Bimbo Jones.