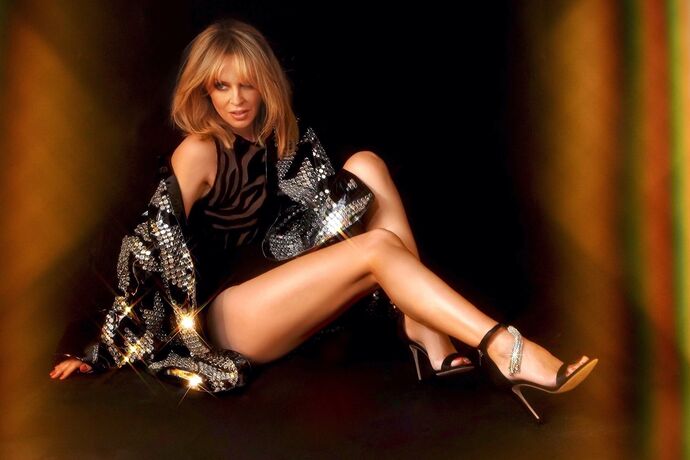 Disco is the fifteenth studio album by Kylie Minogue. It was released on 6 November 2020 by Darenote and BMG Rights Management. Following the completion of the Golden Tour and her performance at the Glastonbury Festival in 2019, Kylie sought to create a disco-influenced record and enlisted producers such as Sky Adams, Teemu Brunila and Biff Stannard. The album was predominantly recorded at her home studio during the COVID-19 pandemic, with Minogue gaining engineering credits for vocals and synths.

Disco received positive reviews from music critics, many of whom praised its fusion of retro and modern production and cohesiveness. The album debuted at number one on the UK Albums Chart, selling 54,905 units becoming the second biggest opening week of the year, and the biggest female opening week of 2020, surpassing Lady Gaga's Chromatica. Kylie also became the first female artist to have a number-one album in five consecutive decades in the country. The album was certified gold by the British Phonographic Industry (BPI) one month after its release for sales of 100,000 units. It also reached the summit in her native Australia, and top 10 positions in eight countries including Austria, France, Germany, Spain and New Zealand.

"Say Something" was released as the lead single from Disco on 23 July 2020. The song was a critical success and peaked at number 56 on the UK Singles Chart. The second single, "Magic", was released on 24 September and peaked at number 53 on the UK Singles Chart. A promotional song, "I Love It", was released on 23 October, while "Real Groove" was announced as the third single on 5 December. On 31 December 2020, a remixed version of "Real Groove" with English singer Dua Lipa, subtitled "Studio 2054 Remix", was released onto digital platforms. In order to promote the album, Minogue took part in interviews and television performances, appeared in several magazines, and livestreamed a concert, Infinite Disco.

Kylie released her fourteenth studio album, Golden in April 2018. The album was a country pop and dance-pop record and was commercially successful, debuting at number one in both the United Kingdom and Australia. It was later certified gold in the former by the British Phonographic Industry (BPI). Kylie then released her fourth major greatest hits album, Step Back in Time: The Definitive Collection in June 2019, which also debuted at number one in the United Kingdom and Australia. Following her performance at Glastonbury Festival in the same year, the most watched in its history, she stated that she would like to create a "pop-disco album" and return to recording new material.

Production on Disco subsequently began in autumn 2019. As with Golden, Kylie did not have a concept solidified when beginning work on the album. However, she felt inspired musically following the Golden Tour (2018–19), which had a section influenced by Studio 54 in its setlist. Discussions with her A&R took place and, following her first few studio sessions, Kylie felt her creative direction was "heading straight back to the dance floor" with a disco-influenced album.

Work continued on the record during the COVID-19 pandemic in 2020, with Kylie using her home studio to record throughout lockdown. Alistair Norbury, president of Kylie's record label BMG, announced to industry title Music Week that the singer was learning to record and engineer her own vocals using Logic Pro to complete Disco. Ninety percent of the album was created via her home studio, with Minogue honing the album's theme of escapism during lockdown restrictions. Each track on Disco was co-written by Kylie, notably similar to Impossible Princess (1997) and Golden, but was the first time she had engineered her own work.

In April 2021, Minogue revealed that she was planning a re-release of Disco for later that year.

On 9 August 2020, Kylie appeared on Australian show The Sound. On 17 September, she performed "Say Something" on The Tonight Show Starring Jimmy Fallon, marking her first appearance on the show. On 29 October, Kylie was interviewed on 7.30. On 1 November, she returned to The Sound performing "Say Something". On 2 November, she was interviewed by Zane Lowe on Apple Music 1. To mark the release of the album, Kylie appeared on Sunrise, The Zoe Ball Breakfast Show, Good Morning America and The Graham Norton Show to discuss the album and perform songs on 6 November. The next day, she live streamed a special concert, Infinite Disco, featuring songs from the album as well as previously released songs spanning her career, the latter reworked by longtime contributors Richard Stannard and Steve Anderson. The same day, aired a special on Rage. On 10 November, she gave an interview to Magic Radio's Breakfast Show and did an appearance on The One Show. On 11 November, Kylie was interviewed on The Morning Show and performed "Magic" on The Late Show with Stephen Colbert. The next day, she appeared on BBC Breakfast and This Morning.

On 15 November, she was interviewed on Sunday Brunch and on Lorraine on 17 November. On 19 November, she appeared on El Hormiguero and on Skavlan the next day. On 27 November, Kylie performed "Real Groove" and "Electricity" with Dua Lipa on her live stream concert Studio 2054. On 1 December, she was interviewed on Quotidien. On 5 December, Kylie appeared on Graham Norton's Saturday Morning Show on BBC Radio 2, as well as appearing on the Jonathan Ross Show, performing "Real Groove". She gave an interview to Les Enfants de la télé on 13 December. On 25 December, Minogue appeared on Lorraine and smoothfm. On 31 December, she will live stream 'Infinite Disco' again and perform on NBC's New Year's Eve.

During her interview with Quotidien, Kylie announced that any plans for a potential tour to promote Disco would not be put into action until 2021, due to the rescheduling of other artists' tours in light of the COVID-19 pandemic, stating "I really want this album to have a chance on the road"; this was also discussed when talking about the re-issue of Disco, hoping it would be released to coincide with a tour announcement.

Following the announcement of Disco on 21 July, 2020, Kylie announced "Say Something" as the lead single from the album. Premiering the song on The Zoe Ball Breakfast Show, "Say Something" was released on 23 July, 2020. A lyric video appeared on Kylie's YouTube channel the following day, and the official music video premiered on 7 August.

On 19 September, Kylie tweeted that she was adding some of her own songs to her Infinite Disco playlist on Spotify; upon investigation, it appeared that the five songs she added, "Dancing", "Say Something", "Can't Get You Out of My Head", "All the Lovers" and "I Should Be So Lucky", each contained new vertical graphic videos, which respectively showed the words: "do", "you", "believe", "in" and "...?", emblazoned over clips of each song's music videos. This led to speculation that the album's second single, rumoured to be titled "Magic", was imminent, and that these words were lyrics from the song. The song was officially announced on Kylie's socials on 21 September, due for release on 24 September.

During her interview on Graham Norton's Saturday Morning Show on December 5, Kylie confirmed that "Real Groove" would serve as the album's third single; a remix with additional vocals from English singer Dua Lipa, featuring additional production, was released on December 31 2020.

"I Love It" was released as the album's first promotional single on 23 October 2020.

On 19 October, Kylie took to her socials to announce a one-off promotional live stream concert entitled Infinite Disco; the live stream occurred on 7 November 2020, the day after the release of Disco, and featured songs from the album, in addition to other songs from her career. All the music for the show was specially rearranged for the stream. Infinite Disco was streamed across 6 time zones. The fifty-minute performance was restreamed on 31 December 2020, with an additional fifteen-minute documentary entitled Dancefloor Dreams, showing a behind-the-scenes glimpse at the show.

Disco received general acclaim from music critics, who praised its production, sound, euphoria and nostalgia, dubbing it as the most consistent and cohesive album of Kylie's career. At Metacritic, which assigns a normalised rating out of 100 to reviews from mainstream critics, the album has an average score of 80 based on 11 reviews, indicating "generally favourable reviews", making it Kylie's highest scored album of her career to date.

In a positive review for NME, Nick Levine described the album as "a consistently uplifting set that feels like Minogue's best album since 2010's Aphrodite [...] Disco shimmers with a warm glittery glow that's just irresistible." Robin Murray of music title Clash called Disco "sheer escapism from start to finish, an exit point from the darkness that has fallen over 2020", while also complimenting the album's fusion of vintage and modern styles. Describing the album as "pure fantasia", Will Hodgkinson of The Times said: "the best thing about Disco, coming at a time when hopefulness has been at a premium, is how optimistic it sounds." Writing in The Guardian, Michael Cragg described Disco as being "saturated in Kylie's supernatural mix of high camp and total sincerity", while also praising the album for its "consistent sonic palette".

Several reviewers praised Kylie's decision to return to her disco-inspired sound, which were prominent in her albums Fever (2001) and Aphrodite (2010), particularly following her more country-themed album Golden (2018). Neil Z. Yeung of All Music praised the album for reaching the same "highs" as her albums from the early 2000's, and considered it a return to form following Golden.

On 21 August 2020, the head of BMG, Alistair Norbury, gave an interview with Music Week about the marketing campaign for Disco. Norbury noted that the label was happy with how things were going, noting that prior album Golden (2018) had sold 156,423 sales to date in the United Kingdom. According to Norbury, initial interest in Disco was outperforming the same stage in the album campaign for Kylie's previous album. This is according to key metrics such as: streaming, Amazon pre-orders, D2C pre-orders and video views.