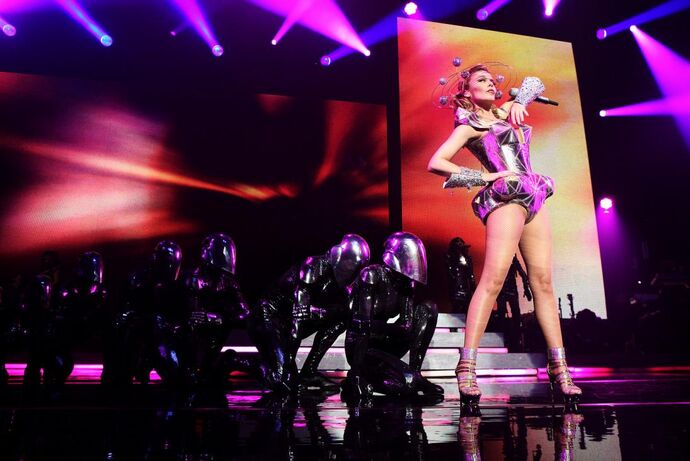 For You, For Me
For You, For Me was a North American concert tour by Kylie Minogue, launched in 2009 as a way to give back to the fans she has there

For You, For Me is the tenth concert tour by Kylie Minogue. It was launched on 30 September 2009 and had a total of 9 shows. It was Kylie's first concert tour in North America, a region in which she has previously had little success and recognition. It was launched for Kylie to test the water there, and also partially to promote her tenth studio album.

In 2002, there was speculation Kylie would bring her Fever tour to the U.S. and Canada, after the success of Fever and its singles in those territories. It was originally believed Kylie did not want to scale down the show for smaller venues but later revealed she was swayed by her management to not perform in the U.S. and Canada. However, Kylie did tour the U.S. with Jingle Ball, an annual concert festival produced on by KIIS-FM, visiting Boston, Anaheim, Houston, Miami, Philadelphia, New York City, and Seattle.

The tour was officially announced via Billboard on 6 May 2009. Kylie stated, "I’ve wanted to tour in America and Canada for years now and know that fans have been waiting a long time for this. I’m thrilled that the opportunity has finally arrived." Bill Silva (CEO of Bill Silva Presents) stated, "Kylie has such a successful career outside of North America that it has taken quite a while to find a window in her schedule for the U.S. and Canada. Her amazing fans in North America will be well rewarded for their patience when they experience her show and its entire spectacle." Kylie promoted the tour on the fourth hour of the Today Show in New York stating that she's always wanted to tour the US, but it was a constant battle with her manager. During an interview with BlackBook Magazine Kylie spoke about her fanbase in North America: "The fans in America aren’t great in number, but they’re great in spirit. And they’ve been so patient. I think I really shocked them when I said I was touring, because they’ve become accepting of the fact that it was never going to happen. But I meant it, all the years I spent saying I would love to tour the States" and what they should expect from the tour: "I decided not to go somewhere I’ve never been before, direction-wise, because American audiences haven’t seen my live shows for the most part. So we decided—and I guess it works well in these financial times—to bring with us a "best of" my different tours". Jean Paul Gaultier created some of the outfits for the show.

Kylie later commented on the tour, stating, "It was a micro-tour, but I’ve got to tell you it was so rewarding [...] It was a mission from the heart… It was like… setting my wallet on fire because basically it just made no financial sense to do it, but I just reached a point where I thought, ‘That's it! I just wanna!’ I got a lot of reward from it. Right back to the heart, so it was amazing."

Across the dates of the tour, the show was split into six sections with the addition of the encore; all the costumes for the tour were designed by for Kylie by French designer Jean Paul Gaultier. The elements of the tour drew inspiration from Kylie's earlier tours, borrowing song interpretations, screen visuals, props and costumes.

The show began with an instrumental introduction containing elements of "Over the Rainbow", "Somewhere" and "The Sound of Music", which leads into the countdown of "Light Years", which was remixed by Steve Anderson; Kylie was lowered onto the stage on the skull used for "Like a Drug" on the KylieX2008 tour; following this is a new remix of "Speakerphone", followed by a new version of "Come into My World", both remixed by Steve Anderson. After chatting to the audience Kylie would go onto sing the KylieX2008 version of "In Your Eyes", closing the section.

The second section began with a slightly altered version of the "Everything Taboo Medley" used in the Homecoming Tour, but used elements and samples of "Fascinated", "The Real Slim Shady" and "Buffalo Gals", the latter two used in the Fever Tour and did not use the "Step Back in Time" sample. Following this medley, Kylie went on to perform "Better Than Today", which was from her then-upcoming eleventh studio album.

The third section began with "Like a Drug", using the intro used on the X Tour; during this section a white version of the "erotic bellboy" outfit worn to sing "Like a Drug" for the X Tour was used. Following "Like a Drug", the "Boombox" / "Can't Get You Out of My Head" mashup was performed, which incorporated the screen visuals of "Can't Get You Out Of My Head" used in the Money Can't Buy  one-off concert. After this, Kylie performed the X Tour version of "Slow" without the "Free" excerpt. To close the section, Kylie introduced the band and performed "2 Hearts".

The fourth section began with a slightly different version of "Red Blooded Woman" used in the both the Showgirl Tour and the Homecoming Tour, but still used the "Where the Wild Roses Grow" excerpt; this performance blended the two performances in the aforementioned tours, using the pommel horse from the Homecoming Tour and the choreography from the Showgirl Tour; this was followed by a small interlude that blended elements and excerpts of "Red Blooded Woman", "Slow", "Heart Beat Rock", "Nu-Di-Ty" and "Wow", dubbed the "Heart Beat Rock Segue", which was followed by a performance of "Wow", closing the section.

The fifth section began with a small instrumental intro dubbed the "White Diamond Theme", which used quotes from various films; this was followed by a performance of the ballad version of "White Diamond", which was followed by the Showgirl Tour version of "Confide in Me", then the ballad version of "I Believe in You", used on the X Tour; throughout the performance of the latter, the screen visuals used in the "Crying Game Medley" during the Fever Tour were used, as well as the falling rose petals used in the tour too.

The penultimate section began with the mashup of Kylie's "Burning Up" and Madonna's "Vogue"; this was followed by the jazz version of "The Loco-Motion" used in the Showgirl Tours. It was at this point in the show that "On a Night Like This" was supposed to be performed, however it was not performed at any of the dates of the tour. Following "The Loco-Motion", Kylie and her backing vocalists sang "Kids" before Kylie closed the main body of the show with a performance of "In My Arms".

The encore began with a performance of a new version of "Better the Devil You Know", followed by "The One", which was performed acoustically for the first verse and chorus and was followed by the Freemasons Mix. At all shows, Kylie closed the set with "Love at First Sight", however, she took requests from the audience each night, and on the last show performed the torch version of "I Should Be So Lucky" used in the Intimate and Live tour before "Love at First Sight".

Act Five
17. "White Diamond Theme" (contains excerpts from various films including: "The Wizard of Oz", "Casablanca", "A Streetcar Named Desire", Sunset Boulevard, "All About Eve", "Beyond the Forest" and "Mommie Dearest", as well as quotes from Judy Garland, Marilyn Monroe, Bette Davis, Katharine Hepburn and Jayne Mansfield) (Video Interlude)
18. "White Diamond"
19. "Confide in Me"
20. "I Believe in You"

^a The 7 October 2009 concert at UIC Pavilion in Chicago was originally scheduled to take place at the Congress Theater.

Though For You, For Me is the first of Kylie's concert tours to not be recorded for video release, it was announced in December 2009, that Kylie would release a live recording of her performances at the Hammerstein Ballroom, entitled Live in New York. The performance of "Better Than Today" was omitted, due to its inclusion on her then-upcoming eleventh studio album Aphrodite. The album was released in digital format, only available to online digital media stores, on 14 December 2009.

Footage from the tour is included on the Special Edition DVD of Kylie's album, Aphrodite. It features the "White Diamond Theme", "White Diamond", "Confide in Me", and "I Believe in You".

On 3 May 2011, to celebrate the arrival of the "Aphrodite Live" leg of Kylie's Aphrodite: Les Folies Tour to the United States, a digital EP was released. Besides including three songs performed by Kylie at the BBC's Live Lounge, it also featured two songs live from her 2009 concert at the Hammerstein Ballroom: "Confide in Me" and "Better than Today", the latter being the only song not included in the Live in New York album.

The skull used in the opening was taken from KylieX2008

The shall bore the flag of the USA

Act V
1. "White Diamond Theme" (Instrumental interlude) (contains excerpts from various films including: "The Wizard of Oz", "Casablanca", "A Streetcar Named Desire", Sunset Boulevard, "All About Eve", "Beyond the Forest" and "Mommie Dearest", as well as quotes from Judy Garland, Marilyn Monroe, Bette Davis, Katharine Hepburn and Jayne Mansfield)
2. "White Diamond"
3. "Confide in Me"
4. "I Believe in You"

Retrieved from "https://kylieminogue.fandom.com/wiki/For_You,_For_Me?oldid=13607"
Community content is available under CC-BY-SA unless otherwise noted.