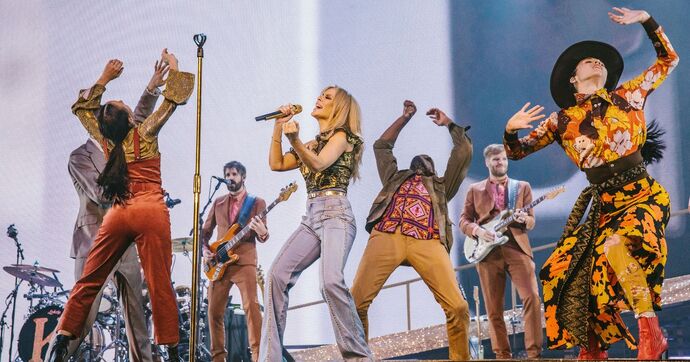 "Golden Tour" is the eighteenth tour by Kylie Minogue, in support of her fourteenth studio album, Golden (2018). The first leg of the tour will comprise shows in Europe, starting in 18 September 2018 in the Metro Radio Arena in Newcastle, England and conclude in the SSE Arena in Belfast, Northern Ireland, before the tour moves over to Australia in March 2019, with dates during the "A Day on the Green" festival.

To coincide with the expected release of the album, Kylie Presents: Golden was announced, a promotional tour consisting of a series of concerts in smaller venues. A new arena tour was announced shortly after on February 23, 2018, with UK and Ireland dates being confirmed. Whilst discussing the development of the tour in July 2018, Kylie stated:

In an interview on Good Morning Britain, Kylie explained that the shows would be split into "two halves", with an interval and a narrative throughout. She continued to say the setlist was mostly concrete at that point, mentioning "Raining Glitter" and "Lost Without You" as definite performances. Kylie's costumes for the tour were designed by Ralph & Russo, Kolchagov Barba, Paco Rabanne, Jitrois, Stevie Stewart and Wrangler.

Shortly before the tour commenced in September 2018, Sonic Yootha were announced as the support act for the UK and Ireland dates, and the previously announced European dates of the Kylie Presents Golden promotional tour would be incorporated into the Golden Tour. On 7 November 2018, Kylie announced six Australian dates for the Golden Tour, three of which will be part of the "A Day on the Green" festival; another date in Sydney was announced due to popular demand.

In the weeks leading up to opening night, Kylie released several teaser videos and images for the tour, several of the photos teasing the inclusion of songs, such as "Put Yourself in My Place", "Million Miles", "The World Still Turns", "Too Far" and "Light Years"; it was later revealed that none of these songs were part of the set list, and were merely selected to fit in with the travelling theme of the show's narrative.

The stage for the tour was designed by Kylie herself and her long-term lighting designer Rob Sinclair; the stage itself was built by Pull the Pin Out Productions, who also built the stage for the Kiss Me Once Tour; the stage was shaped as a lower-case 'g', and featured a ramp at the back of the stage, whose peak was atop a set of gold double doors. The set was in front of a large video screen, which showed the projections throughout the show. The center of the 'g' featured a raised platform, which had a raised platform on top of that for the band; the stage also featured three lifts which were used throughout the show.

The concert begins with a video of mountains against a night sky, with the sun slowly rising from behind the mountains as cricket sound effects play over the top; the band then begin the intro of "Golden" that was done throughout other performances in 2018, with the dancers emerging dressed as cowboys and cowgirls. Kylie then emerges out of the B-stage atop an array of suitcases dressed in a flowing pink Ralph and Russo gown and sings "Golden"; she then goes on to perform a new arrangement of "Get Outta My Way", which is followed by Golden song "One Last Kiss", which was only performed on opening night in Newcastle; the section ends with a new version of "Better the Devil You Know".

Kylie appears on the video screen singing along to Bobby Vinton song "Blue Velvet", before emerging in a white ensemble to sing a small portion of the song. She then launches into a sombre version of "Confide in Me" before moving on to a new remix of 1998 single "Breathe"; this was replaced by "I Believe in You" after opening night. After this she speaks to the audience and passes a rose from the end of the catwalk to the back of the venue singing an acapella chorus of "Where the Wild Roses Grow; she then goes on to perform a new remix of "In Your Eyes" and ends the section with "A Lifetime to Repair".

Kylie starts the third section with a performance of "Shelby '68", before sitting on a stool atop the platform to sing "Radio On". She then launches into a new '90s house remix of "Wow" and continues with a new version of "Can't Get You Out of My Head", which features elements of Fleetwood Mac song "The Chain"; she ends the performance by donning a denim jacket with the name of the city she is in emblazoned on the back, as the words 'to be continued' appear on the screen to signify the start of the 20 minute interval.

The second half of the show starts with leather-clad dancers and motorbikes rising to the stage as elements of "Being Boiled" by Human League play, which is then mixed with "Slow"; Kylie then joins the bikers, dressed herself in leather, before performing the duet "Kids". She continued by performing "The One", and finishes off the section with "Stop Me From Falling".

The next section starts with a bike appearing on the screen, before Kylie emerges from the double doors in a black slip with a red flannel wrapped around her waist; she performs a new remix of "Wouldn't Change a Thing", the songs first live performance since 2001's On a Night Like This Tour, before performing a chorus of "I'll Still Be Loving You", from her first album, which marks the song's first live performance ever. This is then followed by "Especially For You", a huge singalong with the audience; Kylie then sings Golden bonus track "Lost Without You", complete with a laser show, and goes on to finish the section with "All the Lovers", which pays homage to her gay following with the use of rainbow coloured lights and confetti drop.

The penultimate section is a reference to the disco excess of Studio 54, with Kylie emerging in a sparking gold Kolchagov gown to perform a medley of then-unreleased song "New York City", "Raining Glitter" and "On a Night Like This". This is followed by a chugging sound effect as Kylie performs a disco rendition of "The Loco-Motion", followed by a performance of "Spinning Around", which uses elements of "Got to Be Real".

The encore starts with a performance of "Love at First Sight", and the show finishes with the lead single from Golden: "Dancing".

For concerts in the European leg of the tour, a smaller stage was used to accommodate the smaller venues Kylie was visiting; the g-shaped stage was reduced to an end stage, and the size and number of screens was reduced. In addition to this, the opening costume was replaced with a floral patterned dress, which changed on every night of the European shows, as opposed to the pink. The running order of the show was altered as well, to fit with the changes to the stage; "Get Outta My Way" was dropped from the set list, and Kylie performed "In Your Eyes" and "A Lifetime to Repair" in the first section of the show, after "Better the Devil You Know". The second and third acts were merged, with "I Believe in You" and "Radio On" being dropped, and the printed jacket became part of the white ensemble that Kylie wore.

For the two rescheduled shows in Ireland, "Get Outta My Way" was re-added to the set list, and "Let It Snow" was added to the encore between "Love at First Sight" and "Dancing".

For the Australian leg of the tour, the running order used during the European leg was used, however, "Get Outta My Way" was reinstated in the set list. For the final show in the tour, the 17 March show in Mount Cotton, Kylie was joined by Jake Shears, the opening act for the leg, to perform "I Believe in You" together, the song they wrote in 2004 on the first day they met.

The tour has gained acclaim from music critics. Simon Duke from The Evening Chronicle gave the opening night in Newcastle five stars with a positive review, saying that "Kylie dazzled in front of a set with visuals that looked like they’d been lifted straight from a picture perfect postcard of the Wild West". Duke stated that the "well executed and deliciously camp choreography [...] is a must see", being one of the best pop shows "ever experienced".

Adrian Caffery from The Birmingham Mail gave the Birmingham date 4 stars, stating that it was a "rollercoaster concert showcasing 30 years of Kylie [that] failed to disappoint", yet noted "there was a lot less spectacle than in previous Kylie concerts, with the extravagant stages [...] replaced by giant video screens." He concluded that "Kylie turned 50 this year, and on this evidence it’s clear she still has the Midas' touch."

Jack Hardwick from The Daily Star stated that "the pint-sized singer looked hotter than ever as she belted out some of her biggest hits" whilst "wowing fans with her killer vocals and [...] sex appeal. For the opening London date at The O2 Arena, Hardwick gave the show 4 stars, stating that Minogue "wowed fans with a stellar set-list of her biggest hits and a healthy smattering of new album tracks". He commented positively on the simplicity of the show, saying that "Kylie doesn’t need to rely on larger-than-life sets and jaw-dropping water spectacles to put on a killer show". Hardwick went on to praise Kylie's "faultless" vocals, concluding that "the show [was a] nostalgic trip down memory lane [...] [with] disco classics in the form of On a Night Like This, The Loco-Motion, Spinning Around and Love at First Sight." Gemma Sandways of The Evening Standard reviewed the same show, giving it 4 stars and stating that "there was a healthy helping of glamour [...] from the glittering gowns to the giant disco ball and metallic streamers unleashed". She concluded by saying that the "performance served as a welcome reminder of Minogue’s generosity as a performer, and of the refreshing lack of cynicism with which she has always embraced all eras of her career".

On 7 October 2019, Kylie announced the release of a 2CD/DVD bundle, entitled Golden Live in Concert, to be released on 6 December 2019; the DVD will include the full show, plus bonus features, with the CDs containing the audio of every performance on the DVD. The footage was taken from 6 nights of the tour.

It was also announced that an edited version of the footage would be shown on Channel 4, in conjunction with a special 90-minute show.

Adapted from the tour programme credits.

Opening outfit for some of the Australian shows

Opening outfit for some of the Australian shows

• The High & Dry and Nothing Behind Me, Everything Ahead of Me were merged for mainland European and Australian shows

Jacket worn for "Confide in Me" and "I Believe in You"

For the mainland European and Australian shows, the city in which the show was performed was emblazoned on the back of the jacket

The leather jacket was personalised with details about Kylie

A red flannel was added to flow into the next section

A black slip paired with the red flannel

Laser show for "Lost Without You"

Rainbow confetti drop in "All the Lovers"

120,000 Preciosa crystals were hand sewn on to the dress