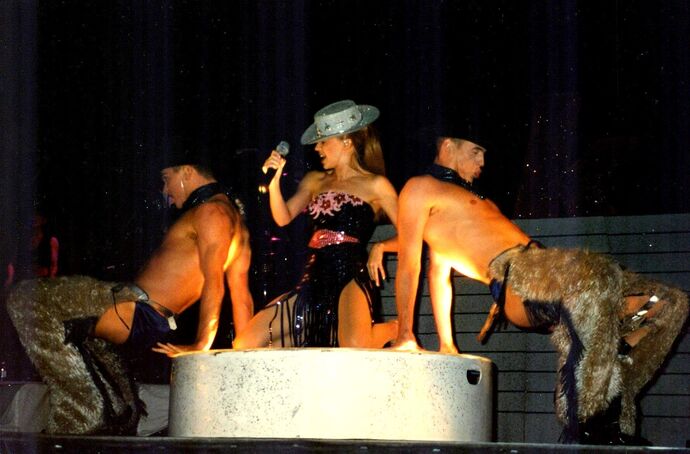 This page is about the concert tour. For the live releases, see Intimate and Live (album).

Intimate and Live was the fifth concert tour by Kylie Minogue in support of her sixth studio album Impossible Princess (1997). Kylie confirmed going on tour in Australia when both her creative directors William Baker and Steve Anderson had talked to her about plans of a tour. The set list consisted of mainly songs from the supporting studio album and rehearsals started during January 1998.

The tour garnered positive appreciation from music critics and commercial success. Tickets were completely sold as soon as dates and venues for the tour were announced, prompting the organizers to add more dates. Despite negotiations on not touring the UK, Kylie decided to visit the country and also achieved positive reviews and commercial success.

A CD and DVD version of the concert tour was released in November 1998 and July 2003 respectively. After the tour, Kylie and Baker went to the US to begin work on Kylie's 2000 album Light Years.

Kylie embarked a promotional tour in the Pacific region in October 1997. She performed in Singapore and then followed with Australian state capitals Melbourne, Brisbane, Sydney and Adelaide. Next was Auckland and she finished off in Hong Kong. After the albums European release, she went on to promote the album with concert gigs in Norway, Denmark and the Netherlands.

In November 1997, Kylie released her sixth studio album Impossible Princess. It became her first album to have partial creative control on songwriting and composing. The album received mixed reviews, many who commended its experimental and adventurous nature, while criticism was primarily directed towards her image and the album's composition. The album peaked at four on the ARIA Albums Chart and number one on the Australian Music Report chart in January 1998. Impossible Princess peaked at ten on the UK Albums Chart. Kylie returned to Australia in early 1998 to prepare for her Australian tour.

Kylie's first rehearsals was in Fitzroy, a town outside of Melbourne, Australia. Her and Baker had started drawing stage concepts of how the tour would look like and wanted it to reflect onto the album's personal meaning. Objects in the album's content, including the "K" symbol and the multi-coloured cone had been featured on the tour. Baker was discussing about the concepts and production of the tour, and felt that "there was something special and unique about Intimate and Live, a coming-of-age Kylie and her team." Baker felt Kylie's innovation with the crew of the tour would "enabled" her to "shine on stage like a true star." The stage was largely based on Impossible Princess but Baker and Kylie wanted to create something that would "take the audience on a journey and tease them with the unexpected, playing with their preconceptions."

Kylie felt she needed to "lighten up" and have fun on tour, rid from all the criticism and what the public said about her. Anderson, Kylie and Baker originally confirmed that they would not tour in the United Kingdom, but Baker commented that they were "so liberated by the British commercial failure, feeling that now we had nothing to lose." They decided to extend it into UK only due to high demand. Kylie and Baker had collaborated with several photographers (including Baker) so they could use pictures to advertise the tour; one of the shots featured Kylie in a cow-boy hate and a pink background, which is similar to the "Cowboy Style" artwork. Deconstruction Records and Sony BMG were not in control of the tour, so Baker and Anderson took control of bookings and organisation.

For venues, Baker and Kylie intended to perform at small theaters in order to create a personal atmosphere between Kylie, the crew and the audience. This idea was to thank the audience for their support through the Impossible Princess era, hence the titling of "Intimate". Kylie, Baker and Anderson searched several venues that had an approximate capacity of 2,000. However, Kylie was still "worried about filling" the smaller venues after the backlash.

Baker and Kylie had both designed the outfits for the tour, with the showgirl design being the first costume. The tour costumes were inspired by "princess" outfits and Kylie wanted to have several props to incorporate different influences while performing. Kylie wanted to take "risks" with the outfits and appearances on tour, so she decided to keep her longer hair that was not present on the promotion shoots of Impossible Princess. Baker felt that her public image had "endured" and evolved severely from her "gritty black-and-white" "Some Kind of Bliss" days.

The set list was sorted by Baker, Anderson and Kylie. From the supporting album, Kylie performed "Too Far", "Some Kind of Bliss", "Breathe", "Cowboy Style", "Say Hey", "Drunk", "Did It Again", "Limbo" and two unreleased tracks; "Take Me With You" and "Free". A cover version of "Should I Stay or Should I Go?" by The Clash was added to the track list after Minogue had performed the track live on The Jonathan Ross Show. Kylie had added her cover version of "Dancing Queen" in the set list.

The concert opens with a multi-coloured opened cone, similar to the artwork of Impossible Princess. Kylie opened the show with "Too Far, which featured an intro of the "Brothers in Rhythm Dub Mix". She then went on to perform "What Do I Have to Do" and "Some Kind of Bliss" before singing an acoustic version of "Put Yourself in My Place". She then performed "Breathe" and closed the first section with a performance of previously unreleased track "Take Me With You", whose backdrop projections featured a rolling storm.

Kylie opened the second act with a torch version of "I Should Be So Lucky" wearing a pink showgirl outfit in front of a giant glittery "K". This led into a cover of "Dancing Queen " by ABBA and a performance of "Dangerous Game", which closed the act.

The third act began with "Cowboy Style", where Kylie wore a cowboy hat, which was followed by a performance of "Step Back in Time". After this she performed "Say Hey" before performing another unreleased unrecorded track entitled "Free"; she went on to close the section with a performance of "Drunk".

The fifth segment started with an instrumental interlude before Kylie emerged reclined on the stairs to perform "Confide in Me". This was followed by a performance of "The Loco-Motion" and the main body of the show ended with a cover of "Should I Stay Or Should I Go?" by The Clash.

Kylie returned for an encore to perform "Better the Devil You Know" in a showgirl-devil costume, complete with devil horns.

Intimate and Live received positive reviews from music critics. Darrin Farrant from The Age wrote "No more "Singing Budgie" cracks. Kylie proved in her first official, public gig in Melbourne in seven years that the doubters were wrong: she can sing and she also knows how to put on a sensational show." He favored the Impossible Princess tracks for giving more "vocal flair." Despite favorable reviews in Australia, Kylie and Baker were worried about the reception in the UK. Jeff Kennett, who was the 43rd Premier of Victoria, congratulated Minogue at the end of her Australian leg, calling her a "wonderful ambassador for Australia wherever she travels,".

Performing at the Shepherd's Bush Empire, the tour received rave reviews from most music critics and Baker commented that "perhaps slightly altering London's perception that Kylie was over.". Melody Maker writer David Benedict wrote that none of her recent music was exciting, and said "Her audience may be loyal, but they're also deeply conservative; none of the recent singles have delivered like the mega-hits of yore and tonight the newer material has a comparatively muted reception." However, he said that all "changed", labeling it a "blinding show" and "so much fun", and said that was some "Kylie does best." Victoria Sega from NME gave it a mixed review. She wrote "There are moments of boredom - indistinguishable balladry that's not so much torch-song drama as fluorescent-tube flash [...]" However, she concluded saying "yet Kylie loves this, she lives for it, and she damns all those svengalis with one twist of her knife-edge heels." She had prospected that Kylie "will be back." Baker viewed felt that Kylie's fans were loyal due to her "pop songs" which he exemplified "Better the Devil You Know" and "Dancing Queen".

In retrospect, Bradley Stern from NewNowNext highlighted the live performance "What Do I Have to Do" as the best song at the show, and listed the performance at number three on their Kylie Minogue In Concert: 8 Amazing Live Performances. Luke Dennehy from Herald Sun wrote an article about the show in March 2015, and said "She certainly did deliver, it was spectacular success." He went on to say "The press at the time called it her homecoming tour, our very own pop princess was back, and for the first time she was truly critically acclaimed for her performance [...] But for many reasons, that tour was so important Kylie and how we see her now ... and of course for her loyal legions of fans out there." The shows had sold out in all of Australia in under ten minutes. Minogue did not plan to tour England, but due to public pressure, she staged three small shows in London.

The show was filmed at the Capitol Theatre, Sydney, on June 3 and July 1, 1998. In November 1998, Mushroom Records released the live album with the same name as the tour in Australia and New Zealand as a cassette and double-CD set. The concert was released onto DVD on 23 July 2002 by Mushroom in Australia and New Zealand. The sleeve design was handled by Andrew Murabito at Mushroom Art and Baker was the creative designer. A VHS was issued in Australia only. "Dancing Queen" appeared on her 2002 greatest hits album Greatest Hits: 87-99.

Encore
23. "Better the Devil You Know"

• Originally, "Copacabana" was intended for the place of "Dancing Queen", given the showgirl theme of the former song and the section in the show itself; "Copacabana" did make an appearance in a Kylie show, however, when it was included in the "Beach Party" segment of the KylieX2008 tour.

Retrieved from "https://kylieminogue.fandom.com/wiki/Intimate_and_Live_(tour)?oldid=12251"
Community content is available under CC-BY-SA unless otherwise noted.