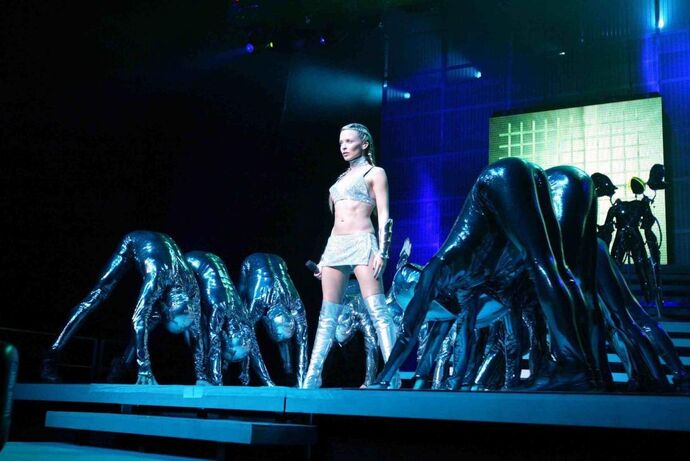 KylieFever2002 was the seventh headlining concert tour by Kylie Minogue. It was launched to promote her eighth studio album Fever (2001). The show was filmed across four Manchester dates, and released on DVD called KylieFever2002: Live in Manchester along with a bonus CD.

The tour was the biggest production Kylie had put on to date. The album and its music videos were able to provide and inspire multiple stage sets and costume changes, the first of its kind to use projection. The tour had a much larger budget than past shows due to the success of the album and its singles. Due to the increase in money the stage sets were able to become much grander with two staircases and five projection screens which were used to enhance the different themes of the show.

The costumes for the show were designed exclusively for Kylie by Italian designers Dolce & Gabbana. The choreographer for the tour was Rafael Bonachela.

It was Kylie's first tour to have sponsors, which were Evian and Vodafone. At each of the UK shows, sponsors Evian gave away free bottles of water, the packaging for which replaced the Evian branding with the name 'Kylie'. Bottles were also marked with the words, "Evian - Kylie's official thirst quencher for the 2002 Fever Tour".

As the album's lead single began to grow in the U.S., Kylie devoted time before the tour to promote the song and album. Kylie's visit sparked rumors of a tour in the States. According to Capitol Records president Andy Slater, a U.S. had not been discussed. Kylie commented on her reluctance to tour the States. She felt the American audience wouldn't "get" her live shows and wouldn't know her back catalogue". Despite rumors of a North American leg, plans never developed due to Kylie's status in that country. During the time, British magazine Hello reported a U.S. tour had been cancelled, so that Kylie could focus on her personal life. It was later revealed Kylie was swayed differently by her management. However, Kylie did tour the U.S. with Jingle Ball, an annual concert produced on by KIIS-FM, visiting Anaheim, Houston, Miami, Philadelphia and New York City.

A special webcast of the show at the Manchester Arena was shown exclusively on MSN UK live for fans around the world.

Across the tour, each show was split into seven acts and an encore, with twenty three songs performed.

Silvanemesis opened the show with an instrumental introduction of "The Sound of Music". Kylie then rises out of the stage encased in a metallic outfit dubbed the "Kyborg". This peels back to reveal Kylie in a silver bra and mini-skirt and matching boots. She goes on to sing "Come into My World" and a remixed version of "Shocked". She then welcomes the audience and sings "Love at First Sight". She then introduces "Fever" and closes the section.

Droogie Nights begins with an instrumental interlude of Beethoven's "Ode to Joy". This then leads into a new remix of "Spinning Around", where Kylie and the dancers are dressed to resemble characters out of A Clockwork Orange.

The Crying Game begins with an interlude of "Where Is the Feeling?" before the left screen rises to reveal Kylie in a black ball gown singing Boy George's "The Crying Game". She then goes onto perform a medley of three of her own songs: "Put Yourself in My Place", "Finer Feelings" and "Dangerous Game" before returning to "The Crying Game" and closing the act.

Streetstyle begins with a dance/video interlude of "GBI (German Bold Italic)". A dancer then enters and draws graffiti on a screen, when Kylie emerges dressed as a police woman to sing "Confide in Me". She then goes on to sing "Cowboy Style" and finishes the act by inviting the backing vocalists to sing "Kids" with her.

Sex in Venice opens with "On a Night Like This", where Kylie and the dancers are dressed in corsets. After this, Kylie sings a new version of "The Locomotion" and then closes the act by performing "In Your Eyes", which breaks down in the chorus to a Latin-style medley of "In Your Eyes", "Please Stay" and "Rhythm of the Night".

Cybertronica is the sixth section and begins with a tap dance interlude which was supposed to lead into a reworked version of "Never Too Late". This was cut, however, and a remixed version of "Limbo" was performed, which saw Kylie rise out of the stage in a pink tank top and white cargo pants. Following this, she sang a new remix of "Light Years" which featured a chorus of "I Feel Love". She then went on to sing a new version of "I Should Be So Lucky", closing the act.

Voodoo Inferno acted as the first encore, beginning with a percussion interlude, before revealing Kylie rising above the stage with a red dress wrapped at her waist singing "Burning Up", revealing 12 dancers beneath it later in the song. She then closes the main body of the show with "Better the Devil You Know".

The second encore was a one-song encore where Kylie rose through the catwalk in a white waistcoat and cargo pants to sing "Can't Get You Out of My Head", mixed with New Order's "Blue Monday"

Encore
27. "Can't Get You Out of My Head" (Contains elements of "Blue Monday")

Encore: Voodooinferno
21. "Burning Up"
22. "Better the Devil You Know"

· Michael Jackson's song "Bad" was originally meant to be part of the set list for KylieFever2002, during the 'StreetStyle' section.
· "More More More" was meant to be part of the setlist after "Spinning Around", but was cut due to time constraints.
· "Never Too Late" was reworked into a stomp version, that the "Cybertronica" dance interlude was meant to lead into, but, again, due to time constraints, and Kylie being unable to learn the choreography, the song was cut from the show; the choreographer, Alec Mann, was still credited in the programme, and due its absence, Enjoy Yourself was the only studio album not to be represented in the show.
· "What Do I Have to Do" and "Step Back in Time" were both considered for the same place in the set list, between "Limbo" and "Light Years" but were both ultimately discarded.
· "Koocachoo" was performed as the last song of the show at the 16 August show in Melbourne, to celebrate the end of the tour.

'Kyborg' opening to reveal the first of the Dolce & Gabanna designs

White jumpsuit added for "Fever", to pay homage to the music video for "Can't Get You Out of My Head"

The costume was inspired by A Clockwork Orange

A rose was included in certain shows

Cargo pants from a line by Dolce & Gabanna

Voodoo Inferno
1. "Burning Up"
2. "Better the Devil You Know"

The dress housed 12 dancers underneath it, whilst Kylie was lifted 15ft above the stage

Cargo pants from a line by Dolce & Gabanna