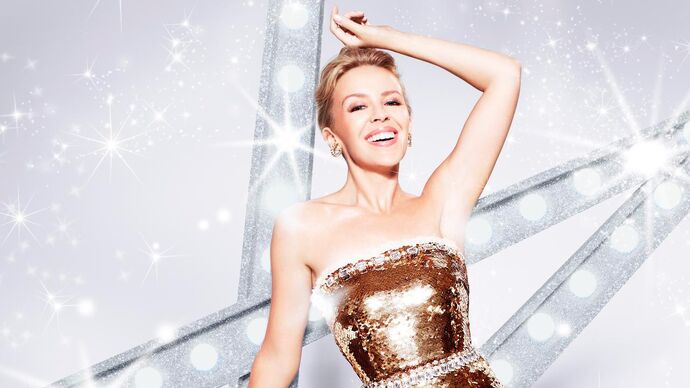 Kylie Christmas is the first Christmas and thirteenth studio album released by Kylie Minogue. It was released on November 13 2015 as a one-album deal with Parlophone, with whom Kylie announced her departure from following the release and promotion of her twelfth studio album Kiss Me Once (2014). She began work on the Christmas album in July 2015, after finishing the Kylie Summer 2015 tour. The album features both cover versions and original songs.

Following the announcement of the album, Minogue also announced on October 2 that she would be performing a one-off show at London's Royal Albert Hall on December 11 of that year, selling out the venue.

The album was reissued in 2016 as an expanded version titled Snow Queen Edition; it included six more songs and was further promoted with two more performances at the Royal Albert Hall on December 9 and 10 2016.

Kylie announced the release of the album in 2015, along with the aforementioned concert series; she has previously released Christmas material in her career; "Santa Baby" was released as the B-side to "Please Stay" from her album Light Years; she released a version of "Let It Snow" in 2010, along with two Christmas EPs in 2010; Kylie Christmas and A Christmas Gift. Minogue revealed that she'd spoken to some of her friends about doing a Christmas album following the end of her Summer Tour in July 2015 in one of the videos that was included in her Kylie Christmas Advent Calendar; she also revealed that her friends had assumed that she'd already done a Christmas album. Kylie Christmas was recorded at Angel Studios and Sarm Music Village, and features a mix of both classical Christmas songs and new original material.

On October 2 2015, Kylie announced that she would be performing a one-off Christmas at London's Royal Albert Hall; the show took place on December 11 2015, where Kylie performed mainly Christmas songs, with the inclusion of some of her non-Christmas songs like "Can't Get You Out of My Head", "The Loco-Motion", "All the Lovers" and "Especially For You". Kylie made a comment prior to the final song stating "Should we do this every year?"; fortunately these plans materialized and, in October 2016, it was announced that two further shows would be held in the venue on December 9 and 10, along with the announcement of the reissue of the album; these performances incorporated tracks from the re-issue of the album, as well as other songs from Kylie's career, plus some special guests.

"Only You" was released as the lead single from the album on November 9, 2015; a duet with James Corden, the song only had an accompanying lyric video, the song was seen as a novelty inclusion by the pair, and was thus chosen as the lead single; the song peaked at 59 on the UK Downloads chart and 104 on the UK Singles chart. The second single released from the album was "100 Degrees", which is a duet with her sister Dannii; the song was released as a single on November 13 2015, and was performed on the X Factor Australia as promotion; this became the sisters' first televised duet together in 27 years. "100 Degrees" was later rewritten and re-recorded to omit the word "Christmas", to become "100 Degrees (Still Disco to Me)" which was released in April 2016. The final single released from the album was the Stock Aitken Waterman remix of "Every Day's Like Christmas", which was released on December 2 2015; critical reception towards "Every Day's Like Christmas" was positive; some critics highlighted it as an album stand out, while many commended the song's production and Martin's involvement, with the remix also receiving favourable reviews.