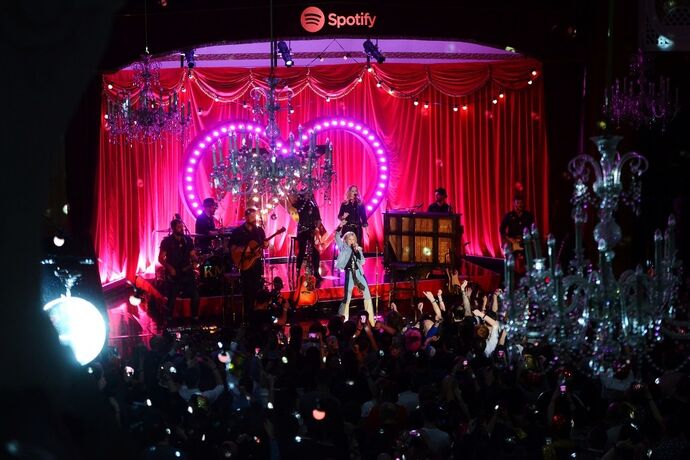 "Kylie Presents: Golden" is a promotional tour by Kylie Minogue. The outing promotes her album Golden. The tour comprised five shows in Europe during March 2018, with an additional date in New York City in June 2018.

In contrast to Kylie's previous tours, except Anti Tour, she will perform on a short strip of concerts in smaller venues, to a reduced crowd and intimate setting.

Speaking on the tour, Kylie stated:

"I'm so excited to perform songs from my new album Golden in these iconic European clubs. Each of these venues is very special and—just as I found making the new album in Nashville to be so energising—these shows will be new, intimate and fun. I just can’t wait to bring these new songs to life and of course, throw in a few surprises for my fans."

The set list constisted of ten songs from Golden, five singles from her back catalogue, and a cover of "Islands in the Stream". She started with "Golden", "One Last Kiss" and "Raining Glitter", before singing her single "Breathe" from Impossible Princess, which was the songs first performance since the Money Can't Buy show in 2003; she then performed Kylie Minogue single, "Put Yourself in My Place" another song she hasn't performed in a while, it's last live performance being on the Showgirl tour in 2005. She then performed "Shelby '68" and "Radio On", followed by the cover of "Islands in the Stream" by the BeeGees. After this, she performed the For You, For Me rendition of "The One", an acoustic opening followed by the Freemason's remix, and followed this with a performance of "A Lifetime to Repair". Kylie was then joined by Jack Savoretti for a performance of "Music's Too Sad Without You", who appears on the album to sing the same duet, which was followed by the Abbey Road version of "Hand on Your Heart". This was then followed by an acoustic performance of "All the Lovers" and the second single from Golden, "Stop Me From Falling". Kylie then briefly left the stage before returning to perform "Sincerely Yours", a song she said was a love letter to her fans, before closing the show with the lead single "Dancing".

During the New York City date, "Music's Too Sad Without You" was not performed; in addition unreleased song "New York City" was added to the set list before "A Lifetime to Repair", with "Love at First Sight" before "All the Lovers" and "Slow" in the encore between "Sincerely Yours" and "Dancing". In addition to this, Kylie sang an excerpt of "Your Disco Needs You" and finished the show with another performance of "New York City".

Retrieved from "https://kylieminogue.fandom.com/wiki/Kylie_Presents_Golden?oldid=12229"
Community content is available under CC-BY-SA unless otherwise noted.