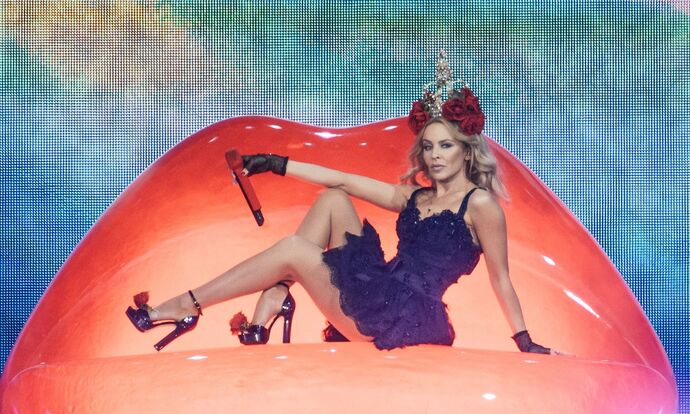 Kylie Summer 2015 is the 2015 European mini-tour by Australian recording artist Kylie Minogue. The tour comprised six shows in Europe, commencing on June 12 in Aalborg, Denmark and finishing on July 18 in Gräfenhainichen, Germany. The show is a mix of the previous Kiss Me Once Tour with a few additions and edits.

Kylie Summer 2015 was a new name used for the summer tour dates. Kylie shared the poster on social media platforms including Twitter, Instagram and Facebook days before her first show. The show was a re-worked version of the Kiss Me Once Tour, which included new songs, new costumes, a new running order, and new screen visuals.

The tour received positive reviews from most critics. Following her show at Haydock Park Racecourse, Tom Belger of the Liverpool Echo gave the show 4 stars, saying it was a "triumphant return to Merseyside". He commented that Kylie's costume "looked a lot like Christmas, but it's hard to blame her for mixing things up on a seemingly endless tour." Ashley Percival of The Huffington Postsaid that Kylie's Hyde Park show was "the Glastonbury set that never was". He gave the show 5 stars, stating that "Kylie proved that you can't keep a disco diva down" following "a tumultuous few years [...] after signing up to Jay Z's Roc Nation following the split from her manager of 25 years in late 2013". He concluded his review by saying hopefully "Michael Eavis has already been on the blower for a headline slot at Glasto 2016". Caroline Sullivan of The Guardian also gave the same concert 5 stars, saying Kylie and "her set reinforces her status as dancepop's greatest poppet". Pierre Perrone of The Independent was slightly more critical of the concert, giving it 3 stars, stating that "Kylie Minogue didn't quite make the leap to outdoor headliner status".

The show began with the video introduction of "Breathe", as used in the "Kiss Me Once Tour", but used elements of "Better the Devil You Know" as opposed to "Les Sex". Kylie then appears on the same pair of lips from behind the dancers; wearing a red leopard print jumpsuit. After this she goes on to sing "In My Arms" which was followed with a performance of the KylieX2008 version of "In Your Eyes". Kylie then quickly addressed the audience, and closed the first section with the Kiss Me Once Tour remix of "Wow".

The second section commences with the same intro and remix of "Step Back in Time", followed by the same remixes of "Spinning Around", "Your Disco Needs You" and "On a Night Like This" respectively, where Kylie wore a red sequined dress with matching boots, along with the collar and tie used for this section in the "Kiss Me Once Tour". After this, Kylie went on to perform a cover of Kim Carnes' "Bette Davis Eyes" which was followed with performances of "Can't Get You Out of My Head" and "Slow". Kylie then took requests from the audience before singing the first verse and chorus of "I Should Be So Lucky" accompanied by a live drum beat; at Hyde Park, Kylie invited the audience to sing the whole song while she was carried round the audience on dancers' shoulders, before going on to sing "The Loco-Motion", and closing the section with "Kids".

The third section used the same version of "Get Outta My Way", but with a shortened intro; Kylie wore a gold jumpsuit with matching shoes. Kylie then went on to sing the Kiss Me Once Tour version of "Love at First Sight" before performing her 1992 single "Celebration", the song's first appearance since 2001. Kylie then addressed the audience and closed the main body of the show with "All the Lovers".

Kylie then performed "Into the Blue" to close the how, which was the only song from Kiss Me Once featured in the set list.

Retrieved from "https://kylieminogue.fandom.com/wiki/Kylie_Summer_2015?oldid=12287"
Community content is available under CC-BY-SA unless otherwise noted.