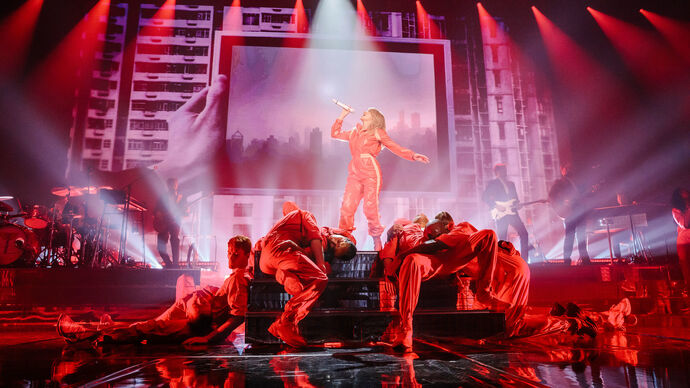 Kylie Summer 2019 is the outdoor/festival tour by Kylie Minogue. The tour consists of 15 shows throughout Europe, and began on 20 June 2019 in London, England at the Hampton Court Palace; the tour will end with a performance at Brighton and Hove Pride on 3 August 2019. The tour is in support of her fourth major greatest hits album, Step Back in Time: The Definitive Collection (2019), and includes a performance of the 'legend slot' at Glastonbury Festival 2019.

The tour was first announced on 12 November 2018, during the European leg of her Golden Tour, The Edinburgh Evening News announced that Kylie had confirmed a show at Edinburgh Castle headlining the 2019 Castle Concert series. Kylie later posted on social media dates for a series of 7 concerts across the United Kingdom, taking place in the summer of 2019; throughout 2019, more dates for the tour were announced, ending up with 15 dates throughout Europe; a second date at Edignburgh Castle were announced, as well as a second show for the Eden Project; Sophie Ellis-Bextor was announced as the opening act for Blenheim and Lytham Festival.

In December 2018, it was announced that Kylie would be performing at Glastonbury Festival, playing the 'legend slot' on 30 June; this performance will come 14 years after she was meant to headline the festival in 2005, as part of her Showgirl tour, but was forced to cancel due to her cancer diagnosis.

It was initially thought that the tour would be a re-work of 2018's Golden Tour, in the way that Kylie Summer 2015 was a re-work of the Kiss Me Once Tour, but on 2 May 2019, Kylie announced the release of her greatest hits album Step Back in Time: The Definitive Collection, which sparked the rumour of a completely new show.

In an interview with Paper Magazine, Kylie mentioned the possibility of rebooting the show for a tour, sparking the rumour of a future greatest hits tour.

For the opening night of the tour in Hampton Court Palace, Thomas Hobbs from the Evening Standard gave the show four stars out of five, calling the show "the perfect warm-up for her Sunday evening legends slot", stating that Kylie was "unapologetically cheesy" but "so endearing". He also picked out the mashup of "Slow" and Bowie's "Fashion" as a highlight of the show.

Laura Snapes from The Guardian gave the Glastonbury show a five-star review, complimenting Kylie on managing a "seemingly impossible combination of sincerity and camp, pop perfection and pure emotion". She went on to applaud her set list and showmanship as "absolutely phenomenal" and concluded saying, "Never mind the legends slot; next stop, headliner." Dan Stubbs from NME praised the show for being "subtly subversive" and concluded that her Glastonbury debut was "worth the wait". Similarly, Anna Leszkiewicz from The Independent gave the show a positive review. Leszkiewicz praised that Minogue "has never been one to shy away from her brand of school disco pop", yet criticised that she sometimes "veered into self-parody" during the show. Kylie's performance was the most watched Glastonbury performance in history, peaking with 3.9 million viewers.

The show opened with "Love at First Sight", with Kylie wearing a white jump suit; she went on to perform "I Should Be So Lucky" and the disco remix of "On a Night Like This", which is followed by the Golden Tour arrangement of "Get Outta My Way". Kylie then went on to perform 1991 single "What Do I Have to Do", the songs first tour performance since Aphrodite: Les Folies Tour in 2011, which was performed as a medley with "Never Too Late".

The second section opens with black and white visuals of a man carrying glittering 'K' through fields, before a pre-recorded Kylie whispers "I still love you"; this then leads into the original mix of "Je Ne Sais Pas Pourquoi", which marks the song's first full live performance since the Showgirl tour in 2005. Following this, Kylie goes on to perform the original mix of "Hand on Your Heart", before performing "In Your Eyes", which combined elements of the KylieX2008 and Golden Tour versions of the song. She then finishes the section with a performance of "The One".

The third section opens with ticking clocks, before a new remix of "Slow", combining it with elements of David Bowie's 1980 song "Fashion". This is followed by the Golden Tour remix of "Confide in Me", before Kylie is joined by her backing vocalists to perform "Kids". The section finishes with "Can't Get You Out Of My Head". Following the recording of Kylie's Secret Night in November 2019, the performance of "Can't Get You Out of My Head" changed from the acoustic into the Golden Tour arrangement, to a nu-disco arrangement, that premiered at the Dubai Rugby Sevens show.

The penultimate section begins with a band interlude of Angry Anderson's "Suddenly", which was the song used as the wedding theme for the episode in Neighbours where Scott Robinson and Charlene Mitchell got married. This is followed by a performance of "Especially For You", Kylie's duet with Jason Donovan. Kylie then goes onto perform a verse, chorus and the rap from Rhythm of Love single "Shocked", which marks the first performance of the song since 2009's For You, For Me tour; this was performed as a medley with "Step Back in Time", which lead into a performance of "Better the Devil You Know"; this marks the first time since 2001's On a Night Like This Tour that Kylie performed all four singles from Rhythm of Love in one show. The disco version of "The Loco-Motion" performed on the Golden Tour was performed next, featuring excerpts of "Bad Girls" by Donna Summer, before Kylie closed the main body of the show with "All the Lovers".

The encore began with a performance of lead single from Golden, "Dancing", before Kylie closed the show with "Spinning Around", incorporating a line from "Got to Be Real". On opening night, these two songs were swapped with each other.

The Final Stretch
1. "Dancing"
2. "Spinning Around"

GRLS!
Retrieved from "https://kylieminogue.fandom.com/wiki/Kylie_Summer_2019?oldid=13076"
Community content is available under CC-BY-SA unless otherwise noted.