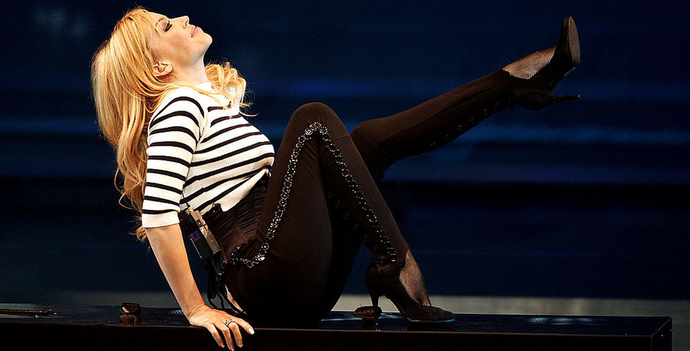 "Money Can't Buy" was a one-off invitation-only concert by Kylie Minogue, held at London's Hammersmith Apollo on 15 November 2003, to promote her ninth studio album Body Language. It was so called as no tickets were offered for sale publicly and only invited guests and competition winners attended the show. William Baker and Alan MacDonald served as creative and art directors, respectively, while Michael Rooney and Steve Anderson worked on the choreography and musical arrangements. Display hardware manufacturer Barco provided LED displays for showing graphics as backdrops to the performances. Kylie wore five different costumes, designed by fashion houses such as Balenciaga, Chanel, and Helmut Lang, for the 75 minutes-long show. The total cost of staging the concert was £1 million.

Kylie primarily performed tracks from Body Language during the show, although songs from her past albums were also included in the set list. It was split in four segments: "Paris by Night", "Bardello", "Electro" and "On Yer Bike". Critical reception towards the show was generally favourable, with compliments directed at the visuals and inclusion of past songs. Critics also praised the show's 80s-influences and its Parisian imagery. The concert was streamed live on AOL.com and broadcast on television channels ITV1 and Network Ten a few days later. It was also filmed and released as a DVD, entitled Body Language Live, on 12 July 2004. The DVD performed well commercially in Australia and United Kingdom, where it received a platinum and gold certification, respectively.

Following the global success of Fever, Kylie began working on Body Language. Aiming to create a dance-pop album inspired by electronic music from the 1980s, Kylie enlisted collaborators such as Cathy Dennis, Dan Carey, Emiliana Torrini, Johnny Douglas and Mantronix. To promote Body Language, a one-off concert show was organised to be held at entertainment venue Carling Apollo, London, on 15 November 2003 – two days before the release of the album.

For the show, Kylie collaborated with creative director William Baker and art director Alan MacDonald. Baker and MacDonald had previously worked with the singer on KylieFever2002. The musical arrangements were handled by Steve Anderson, while the dance routines were choreographed by Michael Rooney. Display hardware manufacturer Barco was hired to provide 100 square metres large LED displays, which were set up on the stage behind Kylie. They were used to show animations and high resolution graphics. Kylie wore five different costumes during the 75-minute-long show. Fashion houses like Balenciaga, Chanel, and Helmut Lang designed these costumes. Kylie was backed by 12 dancers and a full-piece band. The seating capacity of the show was restricted to 4000 spectators and the entire staging of the show cost £1 million.

The concert was entitled "Money Can't Buy" as no tickets were made available for purchase publicly; only competition winners and guests with invitations were allowed to attend the show. Additionally, Kylie donated two tickets to the National Society for the Prevention of Cruelty to Children (NSPCC). These tickets were auctioned at a charity ball for the society's "Full Stop" campaign. The Sydney Morning Herald found it surprising that Minogue chose to perform in an "intimate" setting as she had chiefly embarked on large arena tours in the past. The newspaper felt it was similar to Madonna's decision to perform at a small show at Brixton Academy, London, in 2000. Before the show, Kylie held a media press conference and discussed the development of Money Can't Buy, saying: "It's been pretty intense. I'm trying to look pretty calm but it has been an intense few weeks leading up to this. There's going to be a few old [songs in the set list], but they're not-very-oldies. We're stepping marginally back in time. It's always difficult choosing which songs to play from the new album and then what's going to work. There's a couple of surprises in store and there's a couple of real ‘train spotter' surprises."

In their review of the show, The Age commented that Kylie was able to emulate Bardot's appearance well and wrote: "[Minogue] looked the spitting image of Brigitte Bardot as she turned a corner of west London into Paris for the evening." Andy Battaglia from the A.V. Club complimented the staging and performances as "sharp and kinetic", although he also felt that the "little bits of stage banter deflate[d] an aesthetic otherwise set on air-lock." Billboard critic Keith Caulfield praised the concert show as "extravagant" and opined that it should have been a part of a "mammoth" arena tour. Writing for the Sydney Morning Herald, Greg Hassall gave a favourable review of Money Can't Buy and summarised it as "lots of '80s-influenced electro-pop, with a few oldies thrown in for good measure." People magazine complimented the visuals but felt Kylie's vocals were "electronically enhanced." Craig MacLean from the Daily Telegraph called Money Can't Buy a "real tour de force" and noticed that the tracks from Body Language were more low-key than songs from her previous albums, describing them as "sedate and immaculate dancefloor rhythm" and "All very stylish and considerably more affecting than the similarly nostalgic Sophie Ellis-Bextor." Mclean praised the incorporation of the past songs as they provided "the huge choruses for which the nation loves her so", and concluded of the show: "No slinky back-arching or pristine choreography here: just the giddy joy of pop music at play."

The show was split into four sections and an encore. The first section, "Paris By Night", began with an accapella chorus of "Still Standing", before the curtain opened to reveal Kylie in the outfit worn on the Body Language album cover, seated on a beam, also from the album cover. She goes on to sing "Red Blooded Woman" and "On a Night Like This" which samples "Singin' in the Rain".

The second section, "Bardello", begins with a mashup of Kylie's own song "Breathe" and Serge Gainsbourg song "Je T'aime" from 1969. She then went on to sing Body Language tracks "After Dark" and "Chocolate", closing the section.

"Electro" begins with a performance of "Can't Get You Out of My Head", where the dancers emerged in bondage-style outfits. Following this, Kylie sang "Slow" and "Obsession", tracks from the album, and closes the act with "In Your Eyes".

"On Yer Bike" begins with "Secret (Take You Home)", which saw Kylie reclining on a motorbike in a complete white outfit. She then went on to perform "Spinning Around", closing the act. After a final costume change, Kylie re-emerged to close the show with a performance of "Love at First Sight".

• In initial drafts of the set list, "In Your Eyes" and "Spinning Around" were swapped with each other

The show was streamed live on AOL.com on 15 November 2003. On 22 November, it was broadcast on ITV1, in the United Kingdom. In Australia, it was aired on Network Ten on 24 November.

The concert show was filmed and released as a DVD, titled Body Language Live, on 12 July 2004 in the United Kingdom. In the United States, the DVD was released on 7 September. In addition to videos of the live performances, the DVD contains behind-the-scenes footage, music videos of "Slow", "Red Blooded Woman", and "Chocolate", screen visuals for the performances of "Chocolate" and "Slow", wallpapers, and a picture gallery. In Australia, Body Language Live achieved shipments of 15,000 units and was certified platinum by the Australian Recording Industry Association (ARIA). In the United Kingdom, it was certified gold by the British Phonographic Industry (BPI) in March 2005 for completing shipments of 25,000 units. The DVD also charted on the German Albums Chart, peaking at number 64.

A limited 3-track EP was issued to U.S. Target stores. The disc was released on 10 February 2004 and was received free with the purchase of Body Language.