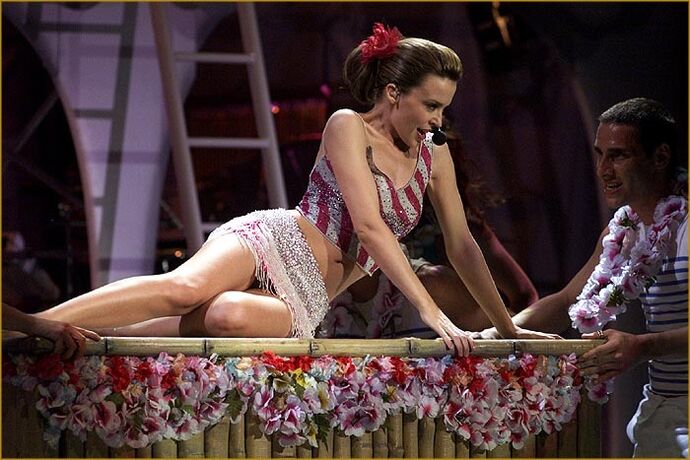 "On a Night Like This Tour" is the fifth concert tour by Kylie Minogue. It was launched in March 2001 in support of her seventh studio album Light Years (2000). Having hit the headlines around the globe for her hugely successful performance at the Sydney Olympics in 2000, and having subsequently performed again at the opening ceremony of Sydney's Paralympics soon after, Kylie seized the opportunity to announce details of her new tour. It became the fastest-selling concert tour of her career when tickets went on sale that November, and with dozens of sell-out shows, she had succeeded in establishing herself as one of the most in-demand live entertainers. The tour began with a bumpy start, however, when the first show in Dublin, Ireland, scheduled for 1 March, had to be cancelled due to treacherous storms preventing air travel into the country.

Kylie was inspired by the style of Broadway shows such as 42nd Street and films such as Anchors Aweigh, South Pacific and the Fred Astaire and Ginger Rogers musicals of the 1930s. Describing Bette Midler as a "heroine", she also incorporated some of the "camp and burlesque" elements of Midler's live performances. The show directed and choreographed by Luca Tommassini featured elaborate back-drops such as the deck of an ocean liner, an Art Deco New York City skyline, and the interior of a space ship. Minogue was praised for her new material and her reinterpretations of some of her greatest successes, turning "I Should Be So Lucky" into a torch song and "Better the Devil You Know" into a 1940s big band number.

The show was split into 6 sections plus an encore across the tour.

The show opened with "Loveboat" where Kylie was lowered onto the stage on an anchor in a flowery shall. She then went on to perform "Koocachoo" followed by "Hand on Your Heart". She then spoke to the audience before she closed the section with "Put Yourself in My Place".

The second section opened with "On a Night Like This", where Kylie emerged wearing a red leather ensemble adorned with flames; she then went on to perform a medley of various hits from her PWL days; after a small intro she re-emerged with a black crop top to perform "Step Back in Time" which was followed by "Never Too Late", "Wouldn't Change a Thing" and Turn It into Love". The medley ended with a performance of "Celebration". After this, Kylie spoke briefly to the audience before introducing and performing "Can't Get You Out of My Head", which was from her then-upcoming eighth studio album. This segment closed with a performance of "Your Disco Needs You".

The third section began with a ballad version of "I Should Be So Lucky", rising to the stage atop a piano wearing a white top hat and tailcoat. After this she went onto perform a big bang version of "Better the Devil You Know", and closed this section with a performance of "So Now Goodbye ".

In the fourth section, Kylie and the dancers emerged onto the stage on stripper poles singing a cover of Olivia Newton-John's "Physical", during which Kylie wore a very revealing gold dress.

The fifth section began with "Butterfly", which featured an instrumental intro. After this Kylie performed "Confide in Me"; in Australia, Kylie performed "Did It Again" and "The Loco-Motion" after "Confide in Me", which preceded a performance of "Kids" which was done with the backing vocalists. Kylie ended the section with a performance of "Shocked".

The sixth section began with a performance of "Light Years", which was followed by a remix of "What Do I Have to Do", during which Kylie introduced the dancers and the band.

Kylie performed "Spinning Around" to finish the show, where she rose to the stage wearing a white crop top and white, diamante-encrusted white hot pants.

• The 'Revue' section was initially meant to start with a performance of "Flashdance", but according to William Baker in the book Kylie: La La La it went down "like a lead balloon" and was cut from the show.
• "Physical" was not performed in Paris.
• "Did It Again" was performed between "Confide in Me" and "Kids" at selected dates.

The DVD features exclusive backstage footage of the concert, including a look into the dancers' dressing rooms and a prank played on Kylie during the show entitled 'Will Kylie Crack'. The prank consist of stage personnel doing random things below the stage where Kylie can see them when she turns to look at the back drop during "So Now Goodbye".