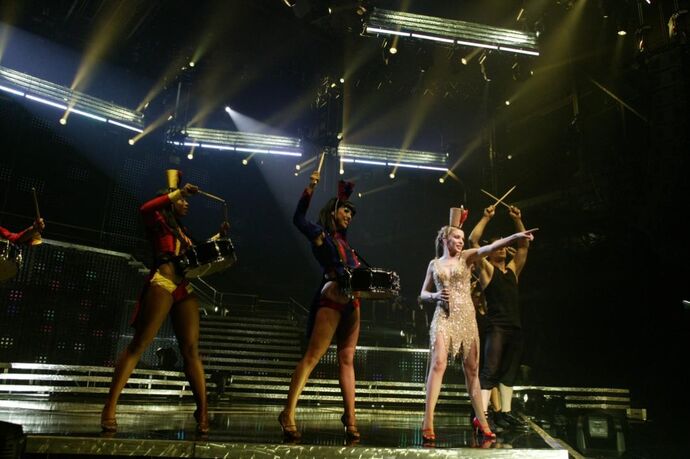 Showgirl: The Greatest Hits Tour was the eighth concert tour by Kylie Minogue. The tour was launched in support of her ninth greatest hits compilation, Ultimate Kylie. Beginning March 2005, over 30 concerts were performed in Europe.

Performances in the United Kingdom grossed nearly $20 million and at the conclusion of 2005, it placed 46th on Pollstar's 2005 "Top 100 Worldwide Tours" having sold 339,105 tickets throughout the year.

Kylie was originally scheduled to perform in Australia and Asia during the tour, but she was forced to cancel the tour when she was diagnosed with breast cancer. She resumed the tour – renamed Showgirl: The Homecoming Tour – on 11 November 2006, performing at the Sydney Entertainment Centre, with a revised set list and new costumes

On 24 October 2004, it was announced that Kylie would go on tour to promote her compilation album Ultimate Kylie. Kylie described the tour as "a celebration of pop songs and my career, but also a long-term relationship with my audience".

The tour was set to visit both Australia and Asia in May and June of 2005, with a further 35 shows scheduled for performance; once the European leg had finished, Kylie made the journey to Australia where she was diagnosed with breast cancer just two days before the first show; henceforth, the shows were cancelled. The shows in Australia were rescheduled for November in the following year under the new title of Homecoming and the Asian dates never came to fruition.

Kylie was also scheduled to be the first female to headline Glastonbury Festival since 1999 in June of 2005 but was subsequently forced to withdraw; her slot was filled by Basement Jaxx, who performed "Can't Get You Out of My Head" in honour of Kylie.

Across the tour, each show was split into seven acts with the addition of an encore, with 27 songs performed.

The show opens with an instrumental introduction that features writing on the video screen introducing Kylie. Kylie then rises out of the stage on a platform dressed in a blue showgirl outfit. She opens the show with "Better the Devil You Know", which is quickly followed by performances of "In Your Eyes" and "Giving You Up". Kylie then performs "On a Night Like This", which begins as a ballad, before resuming with the original after the first chorus. The ending is in the same style as the beginning of the song, where Kylie is taken below the stage, closing the section.

The second section, Smiley Kylie, begins with a dance interlude, that uses excerpts of "Shocked" and "Do You Dare?", before Kylie rises out of the centre of the stage as the DNA intro of "Shocked" is heard. She sings up to the middle eight, before a short segue is played using excerpts of "It's No Secret", "Keep on Pumpin' It", "Give Me Just a Little More Time" and "What Kind of Fool (Heard All That Before)", which leads into a two-verse-two-chorus performance of "What Do I Have to Do", which is succeeded by another segue using an excerpt of "I'm Over Dreaming (Over You)" and then a performance of "Spinning Around" (sampling the instrumentation of "Finally"), which is followed by a dance interlude after the middle eight using excerpts of "Step Back in Time" and "Such a Good Feeling".

The fourth act, What Kylie Wants, Kylie Gets begins with a spraying sound effect during which fake showers and gym equipment rises onto the stage, before Kylie appears on a box singing "Red Blooded Woman" which features a chorus of "Where the Wild Roses Grow" before the middle eight. Kylie then performs her 2003 single "Slow" which is followed by a small flamenco interlude which precedes a performance of "Please Stay"

The fifth section begins with a cover of "Over the Rainbow" where Kylie rises from behind the stage on a sequined moon. This is then followed by a torch version of "Come into My World". Kylie then performs "Chocolate" on the stage, which morphs at the end of the catwalk to form a "cake", from which Kylie performs "I Believe in You". The act closes with a performance of "Dreams".

The penultimate section opens with a performance version of "Put Yourself in My Place", and a performance of "Can't Get You Out of My Head" closes the main body of the show.

Kylie then emerged in a blue ensemble for the encore, talking to the audience before performing a sing-a-long version of "Especially For You", with the audience invited to sing Jason Donovan's part. Kylie then closed the show with a performance of "Love at First Sight", with a video montage of her career shown on the video screens behind her.

• "Dancing Queen" was originally part of the setlist, as this was the song from the Intimate and Live tour that gave birth to Kylie's Showgirl persona; it was, however, discarded.

Kylie's performance in London, England on 6 May 2005 was filmed for TV broadcast and DVD release. The performance was released on DVD and Universal Media Disc on 28 November 2005. The DVD also featured "Behind the Feathers", a documentary, screensavers and exclusive photographs.

The DVD reached number twenty-six on Australia's End of the Year Music DVD Chart in 2005. It was certified platinum in the UK in 2005 and four times platinum in Australia in 2006. Kylie Showgirl was nominated for "Best Music DVD" at the 2006 ARIA Music Awards, losing to Eskimo Joe.

The corset was designed by John Galliano

The headset and bustles were designed by Mr Pearl

The shoes for the show were from Malono Blahnik

The dress for Dreams was designed by Jean Paul Gaultier

A heart prop was used for "Hand on Your Heart"

A hat was added for "Your Disco Needs You"

Retrieved from "https://kylieminogue.fandom.com/wiki/Showgirl:_The_Greatest_Hits_Tour?oldid=14643"
Community content is available under CC-BY-SA unless otherwise noted.