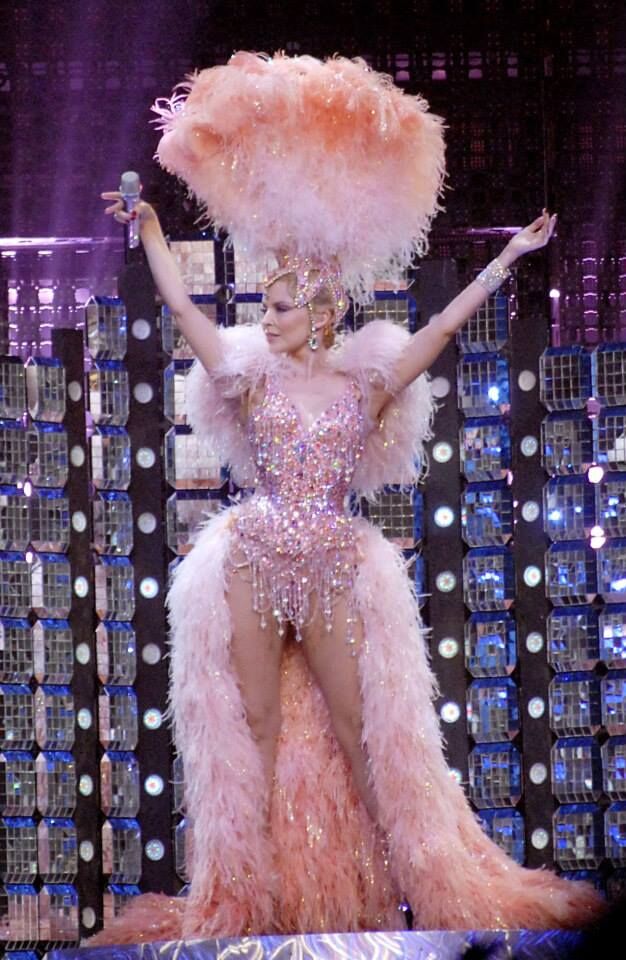 Showgirl: The Homecoming Tour was the ninth concert tour by Kylie Minogue. Kylie was originally scheduled to perform in Australia and Asia during Showgirl: The Greatest Hits Tour in 2005, but she was forced to cancel the tour when she was diagnosed with breast cancer.

She resumed the tour on 11 November 2006, performing at the Sydney Entertainment Centre, with a new set list and costumes. The dance routines from Showgirl: The Greatest Hits Tour were reworked to accommodate her medical condition and longer breaks were also introduced between sections of the show to conserve her strength.

Showgirl: The Homecoming Tour received positive reviews from critics. Christine Sams in a review for The Sydney Morning Herald described the show as an "extravaganza" and wrote that it was "nothing less than a triumph". The Age's Patrick Donovan wrote that Kylie "looked fit and healthy and was in good voice". He also wrote that she was "at her best prowling the stage in a catsuit, playing up to the crowd". CBBC Newsround described the tour as the "perfect comeback" due to its "range of songs, excellent dancers, stage lighting and Kylie's love of performing".

Kylie's performance in Melbourne, Australia on 11 December 2006 was filmed for television and DVD release. The concert premiered on 13 January 2007 in the United Kingdom on Channel 4. On 4 March 2007, the Australian Broadcasting Corporation broadcast the performance without commercial interruptions. The concert was released to DVD on 10 December 2007 as a double disc set with Kylie's documentary film White Diamond.

Kylie's second Australian concert in Sydney on 12 November 2006 was recorded and released as a live album in January 2007. Showgirl Homecoming Live featured a guest appearance by U2 lead singer Bono on the song "Kids". The album reached number seven on the UK Albums Chart and was certified silver.

Across the tour, each show was split into seven acts with the addition of an encore.

The show began with an instrumental introduction, dubbed the "Showgirl Theme Song" that features writing on the video screen introducing Kylie. Kylie then rose out of the stage on a platform dressed in a pink showgirl outfit. She opened the show with "Better the Devil You Know", which was quickly followed by a performance of "In Your Eyes". After addressing the audience, Kylie introduced and sang previously unreleased song "White Diamond". Kylie then performed "On a Night Like This", which begins as a ballad, before resuming with the original after the first chorus. The ending is in the same style as the beginning of the song, where Kylie is taken below the stage, closing the section.

The second section, Everything Taboo, began with a dance interlude, that uses excerpts of "Shocked" and "Do You Dare? ", before Kylie rose out of the centre of the stage and performs "Shocked". She sang up to the middle eight, before a short segue is played using excerpts of "It's No Secret", "Keep on Pumpin' It ", "Give Me Just a Little More Time" and "What Kind of Fool (Heard All That Before)", which led into a one-verse-one-chorus performance of "What Do I Have to Do", which was followed by another segue using an excerpt of "I'm Over Dreaming (Over You) " and then a performance of "Spinning Around" (sampling the instrumentatal of "Finally"), which was followed by a dance interlude after the middle eight using excerpts of "Step Back in Time" and "Such a Good Feeling".

The fourth act, Athletica began with a dance interlude of the Sandstorm Dub of "Butterfly", where acrobat Terry Kvasnik danced round the stage; after this, the same version of "Red Blooded Woman" was performed, still using the excerpt of "Where the Wild Roses Grow", Kylie this time rising atop a pommel horse in a leopard onesie. Kylie then performed her 2003 single "Slow", which was followed by a performance of "Kids". On one occasion, Kylie performed with U2 front man Bono, and on another, with her sister Dannii.

The fifth section began with a cover of "Somewhere Over the Rainbow" where Kylie rose from behind the stage on a sequined moon. This was then followed by a torch version of "Come into My World". Kylie then performed a shortened version "Chocolate" on the stage, which morphs at the end of the catwalk to form a "cake", from which Kylie performed "I Believe in You". The act ended with a performance of "Dreams".

Pop Paradiso opened with an interlude of Kylie's song "Burning Up", mashed with Madonna's "Vogue". She then went on to perform a jazz version of "The Loco-Motion" which was followed by a performance of "I Should Be So Lucky", which sampled "The Only Way is Up". Kylie closed the section with a remix of "Hand on Your Heart"

The penultimate section, Dance of the Cybermen opened with a remix of "Can't Get You Out of My Head", which led into the countdown of "Light Years"; this version of the song was mashed up with Kylie's PWL song "Turn It into Love".

Kylie then performed a sing-a-long version of "Especially For You", inviting the audience to sing Jason Donovan's part. Kylie then closed the show with a performance of "Love at First Sight" with a video montage of her career shown on the video screens behind her.

On 13 January 2007 at the Manchester Evening News Arena in Manchester, England, Minogue was forced to end her concert after performing for an hour due to illness. Minogue's spokesman later confirmed that she had been diagnosed with a respiratory tract infection. Two additional scheduled performances at the Manchester Evening News Arena were postponed and rescheduled at the end of January 2007.

Retrieved from "https://kylieminogue.fandom.com/wiki/Showgirl:_The_Homecoming_Tour?oldid=12613"
Community content is available under CC-BY-SA unless otherwise noted.