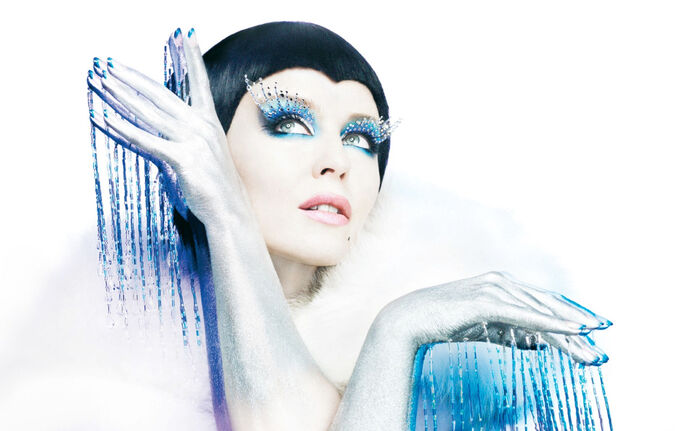 X is the tenth studio album by Kylie Minogue. Released on 21 November 2007 by Parlophone, it was her first release since the greatest hits compilation Ultimate Kylie (2004), and her first studio album since Body Language (2003). Work on the album began following Kylie's gradual recovery from breast cancer and subsequent radiotherapy treatment. Her cancer, which was diagnosed in May 2005, resulted in the postponement of Showgirl: The Greatest Hits Tour midway through its run. Kylie resumed the tour in late 2006, in the midst of recording X, and was completed later in the following year.

Commercially, X was a success. In Australia, the album debuted at number one on the Australian Albums Chart, becoming her first number-one album since Body Language (2003) and was certified platinum by the Australian Recording Industry Association (ARIA). In the United Kingdom, the album peaked at number four, being held off by artists Westlife, Shayne Ward and Leona Lewis. It gained a higher position than her last record and was certified Platinum by the British Phonographic Industry. The album achieved strong charting internationally, peaking inside the top 20 in countries including Austria, Germany, Ireland, Taiwan and France.

A major problem with the album's promotion was Kylie's management selecting poor choices of singles. Numerous sources, including Perez Hilton, responded very positively to the track "Speakerphone", produced by Bloodshy & Avant. Another fan of that song is American singer Madonna who included the track on her Celebrity playlist for iTunes in 2008, stating that she thought that "Speakerphone" was the best song on the album. The song was commended for being overly modern and progressive, especially for an American audience who responded to "Can't Get You Out of My Head".

Others responded that "Wow" or "Like a Drug" would have been a suitable first single for the album in the United States. Instead, with the mentality that the only substantial way to boost album sales in North America would be to appeal to an urban market (similarly to Kylie's ninth studio album, Body Language), "All I See" was released as that region's lead single and failed on the mainstream charts, despite the single version featuring American rapper Mims.

Another problem with the album's American promotion involved Kylie's low-public profile in comparison with the rest of the world. In the past, she had rarely appeared in the public eye in the region except for heavy airplay of "Can't Get You Out of My Head" and "The Loco-Motion", besides appearing on general music channels such as MTV and VH1 and never having a tour on the continent of North America. In Europe, additional problems arose in the release of "2 Hearts" as the song was a drastic jump from Kylie's other work (especially on X) and clearly duplicated from the Kish Mauve version. The release of the final single, "The One" was a neglected release as it featured only a digital download single along with a promotional music video. The single version was remixed with a more club feel by the Freemasons.

On 15 December 2007, a mashup single titled "X Allmixedup" was released on iTunes, containing four songs from X—"2 Hearts", "The One", "In My Arms" and "Like a Drug", with the latter being the only track from these four that did not get a release as a standalone single. The single was only released in Australia and New Zealand for the promotion of the KylieX2008 tour.

"2 Hearts" was released globally as the lead single from X except in the US. The single was a hit, reaching number one in Australia and number four in the UK. The song received mixed reviews, praising the lazy tone and production while criticizing the lack of commercial appeal and memorability. The song was a commercial success, peaking inside the top 10 in countries including Australia and Spain, Italy, Ukraine, Sweden and the United Kingdom.

Despite never having been released as a single, "Speakerphone" managed to chart on the Canadian Hot 100 at number 87 based on high downloads from the album. In August 2009, Kylie held a competition for fans to create a music video for "Speakerphone". The winner was an animation made by Hungarian animator Rudolf Pap, whose video was shown at the Hollywood Bowl on 4 October 2009 prior to Kylie's concert. A version of "Sensitized" featuring French singer Christophe Willem served as a promotional single in Europe, but did not manage to chart on any major record charts.

In May 2008, Kylie embarked on KylieX2008, which became her biggest tour at that time; she visited five continents and performed a total of 80 shows over the course of fifteen months. The show changed continuously throughout the tour, including the set list, the running order, the costumes and even Kylie's hairstyle. As with the X album, the tour rippled the "new wave" theme, made popular in the '80s. The show was divided into seven acts with the addition of an encore and intermission.

The set consisted of a three-tier stage. On the left and right, mini-stages were made available for the band and backing singers. The main stage was minimalist, with an illuminated video floor and gigantic moving video curtains as the backdrop. For performances in amphitheaters, open air and small arenas the illuminated floor and the lavish props, such as the giant skull and purple hoop, were removed due to technical limitations.

Credits adapted from the liner notes of X.

Retrieved from "https://kylieminogue.fandom.com/wiki/X_(album)?oldid=14493"
Community content is available under CC-BY-SA unless otherwise noted.